Speaking, after paying an unscheduled visit to the Center, the philanthropist, used the occasion to roll out several specific supports which the Dangote Group, intends rendering for it smooth take –off.

Inspecting the world class training equipment installed at the Centre, named after him by the Kano State Government, the entrepreneur hinted that his company will provide experienced Expatriate, to manage the Centre.

He disclosed that his support to the Centre was borne out of the need to complement the initiative of the Ganduje administration geared at bridging skills `gap in the country, as well as addressing the mounting incidence of unemployment among Nigerian youths.

Dangote, who exhibited visible joy seeing the several world -class training equipment, recently imported from Britain by the Kano State Government, installed at the Centre, promised to give all necessary support required to make the Centre achieved it desired objective, one of which is to enhance the livelihood of Nigerians.

“I am indeed highly impressed by what I have seen here today, I am talking about the modern training tools put in place here by your administration. It is a known fact that skills’ acquisition is a critical tool for employment, self-reliance and growth of the economy anywhere in the World;

“It is consequent upon this, I wish to announce that the Dangote Group would be supporting this project with the hiring of an experienced expatriate to head the Center, to set the pace for its sustainability, in order to actualize its employability of the youth, and create avenue for them to be self-reliant. 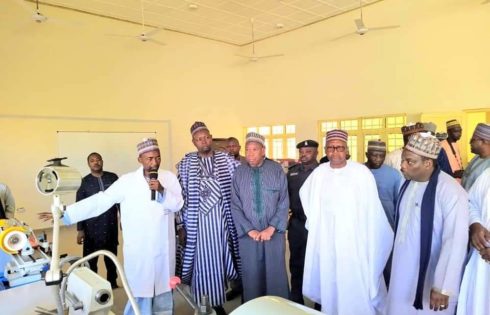 “The Dangote Group would fully fund the cost of hiring the Expatriate to be employed, this is being done as a way of setting high standard for the Centre, which will enable it compete favourably with other similar centers in the African Continent”, Dangote said.

Commenting further, the African philanthropist, disclosed: “Our plan for the Centre is to see being able to attain a very high standard. We want it to be the best in Sub – Saharan Africa, which will put it in a position to catch up with what is obtainable in places, such as Egypt, where similar centers, are in existence”.

Dangote, who was overwhelmed by its size and equipment, commended what he described as the vision of Governor Umar Abdullahi Ganduje, regarding skills acquisition in the state, which according to him, was in line with his determination to help Nigerian youths develop skills that would help them succeed in life.

He said the center will not only serve the people of Kano state, but other states in the federation, noting that the Cement Institute which the Dangote Group, plan to float will on completion be training close to 100, 000 Nigerian youths annually.

Dangote said the investment made by Kano state government in the center is historic, and urged the Government to increase the number of potential trainees from 500 to 1, 000 at a time, considering the needs of the society.

Conducting Aliko Dangote round the complex, Governor Ganduje revealed that several billions of Naira were invested in the project, in terms of infrastructure and equipment, as it was envisioned to close the existing gap between education and employability in the state.