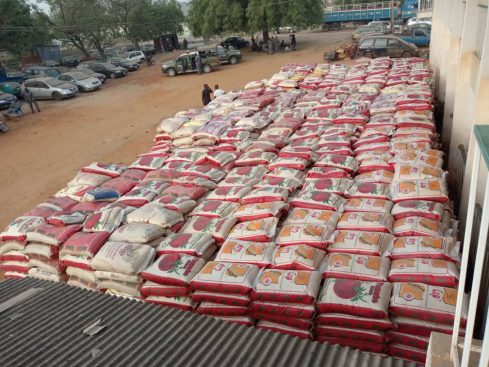 Operatives of the Nigeria Customs Service have laid siege to the Lagos-Abeokuta Expressway and other locations in the Ado-Odo/Ota Local Government Area of Ogun State in search of smuggled rice, frozen poultry and other contraband brought into the country through Idiroko land border.

In less than one month, the agency said it had seized a total of 2,235 bags of smuggled rice along the Lagos-Abeokuta Expressway.

It was learnt that the operatives, who were from the Federal Operations Unit, Ikeja, usually parked their vans at strategic corners along the routes every morning, looking out for vehicles suspected to carrying smuggled goods, most especially rice.

Our correspondent who went round the area found out that the Customs men were in three strategic places along the expressway.

At the first spot, close to the Sango-Ota tollgate area, they randomly waved down vehicles suspected to be carrying rice, and thoroughly searched them, starting with their boots.

Another spot was the failed section at Caso Bus Stop, where they parked their patrol van in a corner, with three Customs personnel standing at strategic points along the road randomly picking on suspected vehicles for the search.

Other checkpoints were found along some major roads leading to Lagos-Abeokuta Expressway such as the Ota-AIT link road and Sango-Ota road.

The Public Relations Officer of NCS, Federal Operations Unit, Ikeja, Jerry Attah, confirmed that the operatives were conducting random checks on vehicles along the route, looking not only for smuggled rice but others like Indian hemp.

He said the operation started from December 1 and it had led to the seizure of 2,235 bags of 50kg rice.

He said, “It is true that our operatives are conducting random checks on vehicles suspected to be laden with smuggled rice, and other prohibited items like the Indian hemp. Between December 1 and December 22, 2019, we have made seizures of no fewer than 2,235 bags of foreign rice (50kg).

“The Lagos-Abeokuta Expressway has been the route where we have made the highest number of seizures. Since our borders are porous, the smugglers bring in those smuggled goods through creeks and bush paths, we have to wait for them on the road.”

Since the closure of the land borders in August, the Customs and other security agencies such as the Nigeria Police Force, Nigerian Army, Nigeria Immigration Service and Nigeria Security and Civil Defence Corps had been carrying out joint patrols at the Seme and Idiroko borders and other communities around the borders.

Since the drills started, several seizures had been made including thousands of bags rice, cartons of frozen poultry, petrol, fertilizers used in making explosives, and arms, suspected to be smuggled items.