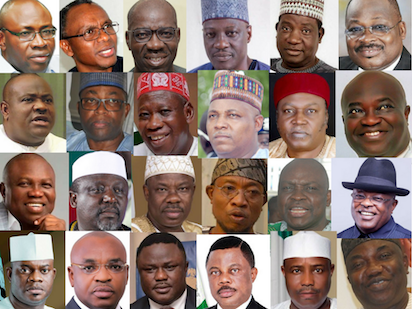 Nigerians are worried over lack of frugality and sense of imprudence demonstrated by a good number of the state governors in utilization of the Paris-Club loan refund. Analysts have described the controversy as affront and therefore, called upon President Muhammadu Buhari to issue a stringent monitoring and evaluation protocol that would ensure excellent accountability of the funds.

Nigerians could recall that the economic crunch that greeted the early life of Buhari administration created fiscal incapability in the states and so many states could not meet their salary obligations with payments lapsing for as many as seven months in some instances. The new Federal Government swung into action to initiate the palliative measure termed bailout fund.

The states’ civil servants began to raise eyebrows when the intervention efforts became counter-intuitive as the salary obligations were not met by the Governors. Regrettably, there were numerous allegations of the bailout funds being traced to the private bank accounts of some state governors while some governors have resorted to either slashing workers’ pay or pay in bits and batches irrespective of stipulations of the Fiscal Commission.

Reacting to this development, a former Military Governor of Kaduna State, Col. Abubakar Dangiwa Umar (rtd) said: “It is now revealed that some governors contracted consultants with fees ranging from 10 to 30 per cent to secure refund from the Federal Government of Nigeria (FGN).

“With this shocking revelation, President Muhammadu Buhari should suspend his order to the Federal Ministry of Finance and the Central Bank of Nigeria (CBN) for the release of the second tranche of the refund. “It is also evident now that most of the earlier released funds were deployed for other purposes than payment of salaries and pension arrears as directed by Mr. President. This impunity has got to stop.”

While the citizens are still contending with the economic hardship, another sordid allegation came to the fore, to the effect that about N3.5 billion was paid out as consultancy fees by a collective of the Nigeria Governors’ Forum (NGF). Some of the fund has reportedly been traced to the bank accounts of senior members of the Senate.

Also troubling is the fact that there is a deluge of consultants supposedly working for the Governors on this fund, both individually and collectively. This fact came out when one of them, in putting up a defense, said that: “It may interest the public to know that the NGF is still being inundated with claims from many other consultants from all over the country who had earlier been engaged and promised commission by the respective states.”

Exonerating themselves from the allegations of misappropriation, the Governors, under the aegis the Nigeria Governors’ Forum, NGF, said that there was no illegality in the disbursement of the Paris Club loan refund. The refund was a result of over-deductions from the statutory allocations of the states for debt-servicing from 1995 to 2002.

Clarifying further, the NGF said: “Our attention has been drawn to publications in the media which are believed to have emanated from the Economic and Financial Crimes Commission (EFCC) about a purported report the anti-graft agency submitted to President Muhammadu Buhari on March 10, 2016.

“The report is said to have indicted the Senate President, Dr Bukola Saraki, and imputed illegal dealings in the disbursement of the Paris Club refund payment to states of the federation as handled by the Nigeria Governors’ Forum (NGF).“

While the NGF will not want to repeatedly join issues with the EFCC on the disbursement of the first tranche of the Paris Club refund, particularly after its officials have been interrogated by the anti-corruption agency and we provided all necessary and required details and documents regarding disbursement to states, including harmonising the number of consultants and payment made to them, we are constrained to once again state the following for the benefit of members of the public: “It is true that Melrose General Services Limited was one of the consultants that was duly engaged and documented to facilitate the disbursement of the Paris Club refund. The consultant was also paid an amount commensurate to the services it provided, among other numerous consultants that were involved in the process.

“The NGF maintains its earlier position that it has done nothing illegal as far as the disbursement of the Paris Club refund to states and the consultants are concerned. The Forum has all necessary approvals to act in the manner it did. “Therefore, the misinformation in the media about the disbursement and insinuations being made concerning some Governors that are being mentioned is outright mischief.”

The mistrust between the governance and the governed gained powerful momentum when the Federal Government hinted the Governors of its plan to release second tranche of funds for some states that supposedly had proof of judicious application of the first disbursement. There was an allegation that a Governor from the northwest state reportedly diverted about N500 million of his state’s N19 billion refund.

The sum is said to have been traced to the account of a mortgage bank the Governor owed. The Governor reportedly took a loan from the bank to purchase two houses in 2013. He saw the refund as his own windfall.

Recall that in 2006, during the administration of former President Olusegun Obasanjo, Nigeria had repaid a total sum of $12 billion as full and final payment of the debt owed a group of Western nation of creditors known as the Paris Club.

The debt burden was a responsibility shared by both the federal and state governments. But over the years, in deducting the States’ component of the debt, the federal government had over-deducted. This error was discovered upon reconciliation and reimbursements are being made to the states in tranches. It is these refunds that are currently being mired in controversy.