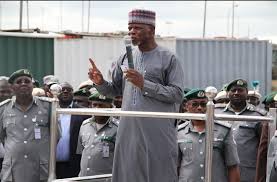 Following the tension generated as a result of misconception and misrepresentation of the Nigeria Customs Service planned motor duty payment, the leadership of the National Assembly and the Comptroller-General of Customs, Col. Hameed Ali (Rtd) met with a view to resolving the impasse and have both agreed to suspend proposed motor duty payment.

Custom boss Hameed Ali This was made known in a statement signed by Joseph Attah, Acting. Public Relations Officer on Wednesday. The statement said both leadership of the National Assembly and the Comptroller-General of Customs, Col. Hameed Ali (Rtd) agreed that the proposed motor duty payment, though in line with the provision of Customs and Excise Management Act (CEMA) Cap C.45, LFN 2004 should be put on hold while the Senate Committee on Customs & Excise interfaces with the NCS for further discussions.

While payment of duty on vehicles or indeed any dutiable imported item remains a civic responsibility of every patriotic Nigerian, NCS Management has directed that the exercise be put on hold while expressing readiness to engage the Senate Committee on further discussions to bring them on board to understand the importance of the exercise to national security and economy.

The Comptroller-General approved one month grace for all Nigerian vehicle owners who have not paid duties to do so or face outright seizure of the vehicles. And this applies even to new vehicles bought from car dealers.

The service gave a window of one month, from March 13 to April 12, for car owners to pay the appropriate duty on their vehicles. The public relations officer said that some owners of vehicles brought into the country through the land borders, obviously, did not pay duty.