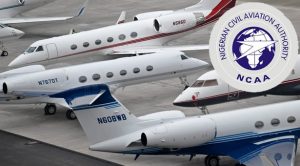 The Airline Operators of Nigeria has said the domestic carriers in the country are being stifled by the manipulation, feasting and pushing of their finances through multiple taxes, charges and levies to the extent that the airlines are now groaning under the pressure and some are going bankrupt.

The Chairman, AON, Capt. Nogie Meggison, said domestic airlines, on the average, pay between 35 per cent and 40 per cent of the cost of a ticket as taxes and charges that come under the guise of statutory levies.

He added that many of the taxes and charges amounted to double taxation such that any incentive seemingly provided by the government to airlines was being taken back by the agencies.

“In spite of all these charges, the NAMA still gets 23 per cent taken from the NCAA’s five per cent Ticket Sales Charge account. Even with all these charges, many of the airports in the country do not have runway lights and navigational landing aids.”