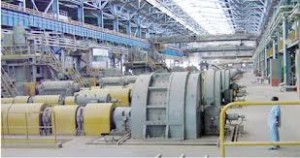 The federal government has allocated over N4 billion for the resuscitation of the Ajaokuta Steel Company. The allocation is contained in the 2017 appropriation budget which was presented to the National Assembly in December by President Muhammadu Buhari.

Minister of Mines and Steel Development, Dr. Fayemi Kayode, had reiterated the commitment of the federal government to settle all litigations between it and Global Steel Holdings Limited, as regards the steel company.

The company is Nigeria’s leading steel plant, and was intended to be the leading supplier of quality steel products in all the major economic sectors including construction, packaging and wire drawing/nail making industry.

Since its inauguration in 1983, however, the plant had been embroiled in managerial inaptitude, controversy ranging from allegations of obsolete machines and outdated blast furnace model. Despite its initial completion, the plant had suffered years of neglect under successive administrations.

According to the ministry’s budget, the Nigerian Geological Survey Agency (NGSA) got N3.8 billion, chiefly for the generation of geological data which hadn’t been updated recently.

The National Metallurgical Development Centre, Jos got N821 million, the Metallurgical Training Institute, Onitsha got N722 million, while the Nigerian Institute of Mining and Geosciences was allocated N472 million.

About N99 million was earmarked for Artisanal Mines and Registration Mineral Buying Centres.

IPMAN to FG: Give us Time to Adhere With Pump Price