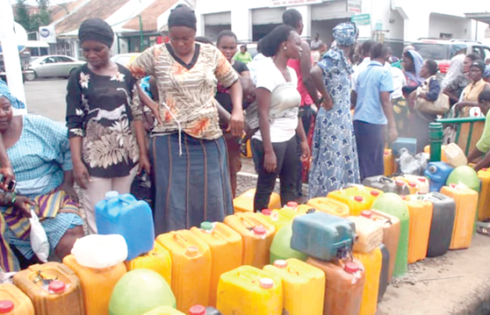 its, …As 30m Households Lament

Dual Purpose Kerosene (DPK), known as kerosene, hit an alltime high price of N600 per litre at the weekend, worsening the pains of over 30 million households who depend on the product for cooking. In its place, millions of poor Nigerians who use it for their stoves, lanterns, and other purposes, are now seeking alternatives to the very important and most commonly used petroleum product.

They have now resorted to the use of charcoal, firewood and polythene bags to make fire to cook for their homes. More fortunate Nigerians use gas cookers, even though the price of gas has also been on the rise. The scarcity hit major cities across the country, with most retail outlets in Abuja, Lagos, Ogun, Oyo, Osun, Enugu, Akwa Ibom, Kano, Kaduna and Abia states going out of stock.

The Liquefied Petroleum Gas (LPG), known as cooking gas, also remained high at the weekend selling at N320 per kilogram. A survey by the OTL, organisers of Nigeria’s biggest downstream seminar and exhibition, showed that over 30 million Nigerian households use kerosene for cooking and for light as well as fuel for local lanterns.

The scarcity of the product, checks by New Telegraph revealed at the weekend, worsened with the product selling between N200 and N600 per litre nationwide, depending on proximity of the area to Lagos, where the loading depots for the product are situated.

DPK has been deregulated and majority of marketers, who hitherto reduced importation of the product, this newspaper gathered, have now halted importation due to difficulty in accessing foreign exchange. “The shutdown of refineries that produce DPK through which the market is augmented, is another major problem,” a marketer told New Telegraph.

“The Pipelines and Products Marketing Company (PPMC) is now the major importer of the product and except the majors, most of the independent marketers, if not all, depend on loading from PPMC’s depots. And this explains reasons for the scarcity,” he added.

The price of cooking gas has also skyrocketed, making it unaffordable to some middle income earners, some of who have reverted to kerosene as a cheaper source of energy. “This has also increased the pressure on kerosene and contributed to its scarcity, because it contributes to the high demand for the scarce product with limited supply,” the marketer said.

New Telegraph’s findings showed that while filling stations are going out of kerosene, the smaller retailers who have the product in Lagos and Ogun sold it for as high as N450 and N600 per litre. The Nigerian National Petroleum Corporation NNPC) and its subsidiary, PPMC, were not available for comments.

NNPC spokesperson, Mallam Garbadeen Muhammed, neither picked calls on his cell phone nor responded to a text message seeking his reaction to the scarcity. In Abuja, the product is mostly sold at the “black market” at a very exorbitant price. A litre of the product goes for as much as N270 to N300, depending on the area.

A factional secretary of the Independent Petroleum Marketers Association of Nigerian (IPMAN), Alhaji Danladi Pasali, said that the product is in high demand. Pasali said that some industries use kerosene for one thing or the other in the process of manufacturing their products.

In Kano, residents have dumped the use of kerosene for charcoal and firewood following the rising cost. The product now sells at N1,200 a gallon from just N500. Mrs. Kemi Oladifo, who is a resident of Tudunmurtala, a locality of Nassarawa Local Government in Kano, told our correspondent that she used to buy like two gallons and sell to neighbours, until the price rose to over N1000, forcing her out of business.

She said that most of those that used to purchase from her have now dumped kerosene for charcoal and firewood because they cannot afford N200 for a bottle.A beer bottle of kerosene now sells between N160 and N200 in Oyo State.

At some major stations, which dispense it, a litre is N220. Mrs. Bukola Oyekola, a secondary school teacher in Ibadan, said: “Use of stove has now become a difficult thing as a beer bottle of kerosene now costs N180, unlike less than N100 we used to buy it before. The price of gas has also gone.

Charcoal is now the alternative in many homes. With the current non-payment of salary in this state, I have been compelled to improvise a saw dust-powered stove as alternative to kerosene.” It is the same story in Plateau State as many houses have shifted from using kerosene to charcoal, gas and firewood. Kerosene now sells for N250 per litre in filling stations, while a gallon of four litres goes between N1,450 and N1,500 in a market. A visit to the popular charcoal market in Jos, witnessed a lot of people patronising the market.

Mrs. Phoebe Dawal told New Telegraph, at the charcoal market in Jos, that: “We had to start buying charcoal because kerosene is costly now. We normally use kerosene throughout cooking at home. But now, we buy charcoal and even firewood to mix so that it would serve us at home.”

The people of Kaduna State are also groaning under the exorbitant cost of kerosene as the cooking fuel costs N1,100 per gallon, indicating a 600 per cent increase in price. Speaking to our correspondent, Malama Hadiza Adam, said that housewives now use polythene bags and used pure water sachets as “fuel” for those that use firewood in cooking. She said that the polythene bags and various plastic waste materials are used to start fire with firewood.

Another respondent that saw dust and wood shavings are now used as sources of energy in order to aid combustion. Similarly, some residents in Lagos have lamented over the hike in the price of kerosene, which now sells for as much as N220 and N240 in many outlets.

While many residents are gradually switching over to firewood to cook, others are adopting charcoal as those who are using LPG are lamenting the sudden hike in the price of gas. Speaking with New Telegraph, a resident, Mrs. Sarah Awe, who lives in Surulere, appealed to President Muhammadu Buhari to do everything possible to reduce the price of kerosene and gas for the sake of the masses.

According to her, “It is sad that we buy a bottle of kerosene, which is usually less than a litre for N250 at local outlets. By the time you go to the filling stations, thinking it would be lower, you will realise that a litre is sold for N240 or above.” Kerosene costs between N200 and N220 per litre in Ilorin, the Kwara State capital.

Most families now combine the use of gas with kerosene stove and coal pots to save costs. Some families have also resorted to using sawdust. “I have seen some people at the saw mill gathering sawdust. You know, we used sawdust in those days,” a housewife told our reporter. Residents of Lafia, the Nasarawa State capital and environs, are lamenting over the cost. A litre of kerosene costs between N270 and N300 depending on the location or part of the metropolis.

A housewife, Mrs. Margaret Emmanuel, who resides in Tudun Abu, a suburb of Lafia, lamented high cost of kerosene, saying, “I no longer buy kerosene now because of the high cost. I use charcoal or firewood as alternative to kerosene.” Before now, a litre of kerosene was sold between N120 and N130 and N1,500 per 25 litre gallon and was available at filling stations in Ebonyi State.

The commodity is now sold between N240 and N260 per litre and N6,000 per 25 litre gallon. It is a similar story in Yobe State as many have resorted to firewood. In Damaturu, the Yobe State capital, for more than three months now, no filing station was seen selling kerosene. Rather, kerosene is sold by black marketers at exorbitant prices.

A gallon of kerosene in Potiskum, the commercial centre of the state, sells from N1,500 to N1,700. Most locals now use firewood, as well as coal, as sources of their cooking energy. In Jalingo, the product is sold by black marketers at exorbitant prices.

A gallon of kerosene in Jalingo is sold between N1,300 and N1,500. “We travel from here to Wukari or Takum to get kerosene, and we buy it from the major marketers at the rate of N240 per litre,” a roadside black marketer told our reporter.

The story is not different in Maiduguri, Borno State. Our correspondent, who went round reports that it is only black marketers who sell the commodity at N1,400 per gallon. One kerosene seller, Ibrahim Abubakar, said there is no kerosene in filling stations in the state, even at the NNPC Mega station.

A Maiduguri resident, Mallam Modu Hassan, said they have resorted to the use of charcoal, because it is the cheapest means of cooking now. In Enugu State, people who spoke to New Telegraph, expressed dismay over the situation, describing it as untold hardship and punishment to the people.

Mrs. Alice Ugwuanyi, a housewife in Enugu, stated that since the scarcity and high cost of kerosene, many have resorted to gas and firewood as alternative to kerosene. At Conoil filling station along Agbani Road, the kerosene product was sold at 200 per litre.

Last week, the product sold for N220 per litre in Abia State. Mr. Emmanuel Kalu Onuka, who lives in Ubakala, Umuahia South Local Government Area, said that since the astronomical rise of the price of kerosene, he has resorted to the use of firewood. He said he fetches firewood from his farm.

“As long as it remains like that, we will not use kerosene again,” Onuka told New Telegraph. Mrs. Charity Okorie said she has reduced the quantity she normally buys for the family use. In Osun State, no less than 70 per cent of the populace uses kerosene.

Madam Gozie, a housewife in Okpanam town in Oshimili North council area of the state, said she has since resorted to the use of charcoal. “I have resigned to fate. I don’t want to border myself with the problems of this country,” she said.

Biden Appoints Nigerian Lawyer as US Director of Trade