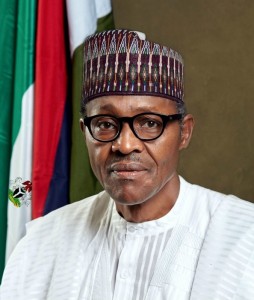 President Muhammadu Buhari has again pleaded with militants in the Niger Delta to change their minds and has promised them justice, even as he has made it abundantly clear that the nation’s unity is not negotiable.

Buhari, who spoke while receiving a cross section of Nigerians, mostly Muslims, who paid him Sallah homage at his residence within the precinct of the Presidential Villa, recalled the famous quote of former military Head of State, General Yakubu Gowon, stating that the task of keeping Nigeria as one indivisible entity was a task that must be done.

The president said the slogan in the 1960s “Go on With One Nigeria (GOWON)” was very apt now, as keeping Nigeria one was a task that must be done.

He also used the occasion to call on those who had stolen public funds to return them to the treasury otherwise they would not know any peace.

Noting that there was a lot of improvement in security in the North-eastern part of the country in the last one year, he said that the attention now was on the Niger Delta region.

He said: “On security, we have made a lot of improvement. On Boko Haram militants, there is improvement. We are now concentrating on the (Niger Delta) militants to know how many of them in terms of groupings and leadership, and plead with them to try and give Nigeria a chance.

“I assure them that the saying by General Gowon that to keep Nigeria one is a task that must be done. In those days, we never thought of oil, all we were only concerned with was one Nigeria.

“So please pass this to the militants, that one Nigeria is not negotiable and they had better accept this.

“The Nigerian Constitution is clear as to what they should get and I assure them there will be justice.”

He also appealed to looters of public funds to negotiate with the authorities and return it in peace.

“Please persuade those who have plenty of money that does not belong to them to try and negotiate, return it in peace, otherwise we will continue to request for its return,” he said.

Also acknowledging that the nation is contending with several problems, Buhari said that the Minister of Agriculture, Audu Ogbeh, was working very hard with the Central Bank of Nigeria (CBN) governor to ensure that about 13 states start production of rice.

He commended the initiative, adding that it was giving the country confidence while many farmers are already going back to the field.

Vice-President Yemi Osinbajo, who noted that the Muslim celebration was a time for the forgiveness of sins, said the past one year had been tough.

He prayed that the president would continue to have the wisdom and strength to overcome any challenge facing the country.

The Minister of the Federal Capital Territory (FCT), Mohammed Bello, who led the delegation, prayed for God’s wisdom, good health and success for the president as he steers the ship of state.
The president during the homage was presented with Sallah greeting cards and a mirror.

Also in the delegation were the Chairman, Christian Association of Nigeria (CAN) FCT chapter, Israel Akanji and Dr. Kabir Adam of the National Mosque, Abuja.

But as Buhari reiterated his appeal to militant groups in the oil-rich region to end their destructive activities, the Niger Delta Avengers (NDA), the new face of violent agitation in the region, yesterday accused the federal government of opening negotiations with people they described as “fraudsters”, in a bid to end the current crisis in the area.

Wednesday’s assertions by the Avengers, which has claimed responsibility for the recent wave of attacks on oil and gas installations in the Niger Delta, came just as another militant group – the Joint Niger Delta Liberation Force (JNDLF) – threatened to blow up 10 oil and gas facilities in Bayelsa State, to express their displeasure over the handling of the ongoing crisis in the region.

Directing its anger at a recent article by the president’s media aide, Mr. Garba Shehu, on the rising militancy in the Niger Delta, the Avengers quoted him as having written: “My conversation on this issue with General Babagana Munguno, the National Security Adviser precisely two weeks back, he informed this reporter that he met 14 groups claiming leadership to the renewed onslaught on the nation’s economic jugular vein.

“Each of the groups had been brought to him by a serving governor or a former one; a serving minister or one that had left office with assurances that ‘this group is the one to talk to’.

“The amazing discovery he made from his meetings is the lack of unity among them, as each group that came attacked the one that came before it as inconsequential.”

Responding to the president’s media aide, the spokesman of the group, Mudock Agbinibo, denied ever meeting with any contact committee from the federal government, insisting that those engaged in negotiation with the government were doing so in order to swindle it.

“We, the Niger Delta Avengers, have not negotiated with anyone. So we don’t know where Mr. Garba Shehu and General Babagana Munguno, the National Security Adviser, are getting their information from.

The group also dismissed assertions that its members were killing soldiers and raiding homes.
“We want Garba Shehu to go and get his record straight. Niger Delta Avengers has not killed and kidnapped oil workers, we are not into sea piracy, and we have never killed policemen.

“The Buhari-led government knows the people attacking soldiers and killing policemen. It’s their sleeper agents that are doing it. So they should stop tagging Niger Delta Avengers to killings, kidnappings, ransacking of policemen, soldiers and individuals in the region,” it said.

The JNDLF, on the other hand, which said its members had been meeting in Yenagoa, threatened to destroy oil and gas pipelines running from Ogboinbiri in Southern Ijaw of Bayelsa State to Obrinkon in Ikwerre Local Government Area of Rivers State.

It said: “Oil and gas pipelines running from Ogboinbiri in Southern Ijaw of Bayelsa State to Obrinkon in Ikwerre Local Government Area of Rivers State are to be finally cut off from transmission.”

“We further warn those staying around and within those areas to please leave because our mission is to cripple the economy of the country and not to kill any human being on earth.

“The Nigerian security forces which claim they are securing the oil facilities in the region should stay away at their dwelling places and see whether their safety will be guaranteed by the music on those days,” it threatened.
While commending the Minister of State for Petroleum Resources, Dr. Ibe Kachikwu, “for the bold steps he personally took to resolve the injustice created and sponsored by the wicked companies and government in Nigeria”, the group claimed that its struggle transcended monetary gains.

“Our field commanders have been instructed on what to do and those who are on standby in Rivers, Akwa Ibom, Edo, Delta and Cross River await after Bayelsa State operations.

“We further warn that henceforth, any attack on Ijaw communities or person(s) by the military or para-military bodies in the region, we will not hesitate to order our shoot-at-sight squad of any uniformed personnel in the region.

“For the record, the Niger Delta Avengers are not in Delta State, they only go there to strike and return back safely to the struggle base, Bayelsa State,” the group said.

Nigeria’s Debt Rose By 226% To N39.56trn Since Buhari’s Administration