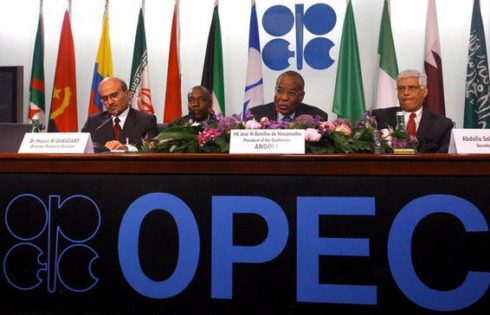 There are conflicting figures over the current Nigeria’s oil production after the destruction of oil pipelines as Niger Delta militant group claims it is now 800,000 barrel-per-day while the Ministry of Petroleum insists the production is now 1.6m bpd after some repairs.

The Niger Delta Avengers (NDA), a militant group attacking oil installations in the Niger Delta region has claimed that it has reduced oil production in the country from two million barrel per day to 800,000 barrel.

Their claim came a day after the Minister of State for Petroleum announced that the oil production has increased to 1.6m daily after major repairs were undertaken.

While disassociated the group from the attack on a military houseboat in which two soldiers and six civilians were killed, NDA said the killing of sleeping soldiers is not the group’s style.

In a statement posted on the group’s website and signed by Brig Gen Mudoch Agbinibo, the group’s self-acclaimed spokesman said: “When it’s time to face the military in combat let the whole world know that we won’t be the ones to throw the first punch… We were able to drop Nigeria Oil production from 2million Barrels to just 800,000 barrels without killing a soul.”

The Minister of State for Petroleum Resources, Dr. Ibe Kachikwu, meanwhile disclosed that Nigeria’s crude oil production has climbed to 1.6 million barrels per day (mbpd), following repairs on some of the oil and gas installations damaged by Niger Delta militants.

According to reports from Reuters and Bloomberg, Kachikwu said in Vienna, Austria, where oil ministers of the Organisation of Petroleum Exporting Countries (OPEC) unanimously appointed the former Group Managing Director of the Nigerian National Petroleum Corporation (NNPC), Dr. Mohammed Barkindo, as the cartel’s Secretary-General, that the country’s production had rebounded to this level after it fell to about 1.4mbpd in May due to a string of militant attacks and an accident on the ExxonMobil Qua Iboe export platform.

He also said despite continued attacks by militants in the restive Niger Delta, Nigeria was still on target to produce 2.3mbpd in 2016.
His disclosure also followed reports that OPEC appointed  has again failed to agree on production cuts or freeze to shore up crude oil prices in the international market as disagreements between two Middle East rivals, Saudi Arabia and Iran, resurfaced.

OPEC failed to agree on a crude oil output policy, even though Saudi Arabia promised not to flood the oil market with extra oil, while Iran insisted on the right to raise its production steeply.

Reuters reported that tensions between the Sunni-led kingdom of Saudi Arabia and the Shi’ite Islamic Iran had been the highlights of several previous OPEC meetings, including in December 2015 when the group failed to agree on a formal output target for the first time in years.