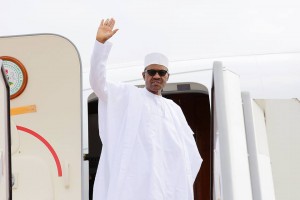 President Muhammadu Buhari has subscribed to an age-long belief that all mortals can fall sick and that he, too, can take ill.

The President made the admittance at Nnamdi Azikiwe International Airport, Abuja, en route London, United Kingdom, for medical attention on his ear.

Recall that the State House had on Sunday night, announced that the President was ill and needed to see his doctors in a London hospital to attend to his ear.

While departing Nigeria, the President, who spoke to journalists, said he had also communicated the National Assembly about his trip.

He said: “I have already told Nigerians that I am going for 10 days to get my ear checked. The National Assembly knows, they have been formally informed.’’

On how to calm the tension of a President falling sick, the President answered “is there anybody that doesn’t fall sick?”

Adesina said: “The buzz going round town is that the President is “ill”, but “ill” will be a misnomer. It should not be the right word to use.

“The President is going for a 10 day rest and during that period he will see specialists who will look at his ear because he has been treating that ear locally for sometime.

“Nigerian physicians have looked at it and now they have said you are going to UK, now that you will be there let specialists look at the ear. They have treated it locally so it is not a question of whether the President is ill. If he is ill, it presupposes that there are certain things that he cannot do.

“Till the very last minute that he is traveling, the President performed the duties and functions of his office as the President.

“So illness is not the issue but as a human being, yes, he can rest. He has been President for one full year. You know that in February, he took 5 days leave. He is taking another 10 days now that means 15 days leave in one year.

“You and I take more than that. So, it is natural that the President as a human being is taking 10 days rest but he is not ill.

“We need to underscore that. Rather than going into a frenzy, I will urged Nigerians to just show goodwill and patriotism. They should pray for him and wish him well. Things about health, life and death are in the hands of God. But I believe that all is well with out President and God will take care of him and take care of the country.”