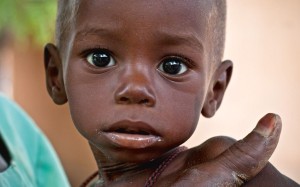 A report unveiled by the United Nations Development Programme in partnership with Oxfam Nigeria revealed that 46 per cent of households in Nigeria’s North-East borrow money to eat, while 61 per cent of residents in the region lack access to portable water.

The North-East of Nigeria where there are many displaced people including displaced children comprises six states which include Adamawa, Bauchi, Borno, Gombe, Taraba, and Yobe.

The Livelihoods and Economic Recovery Assessment 2016 report, which was unveiled in Abuja, came up with a number of key findings after an assessment that was conducted by Oxfam Nigeria on behalf of the UNDP in four states (Borno, Adamawa, Gombe, Yobe), eight local government areas, 24 wards and 3,258 sampled households.

According to the report, 30 per cent of the households in the region were economically inactive, 86 per cent spend more than they earn, 55 per cent lack sanitation facilities, while their socio-economic situations were diverse within the surveyed locations.

Outlining other key findings in the North-East as contained in the report, the UNDP said, “One economically active member of a household sustains 2.3 non-active members, while a majority of them do not have sufficient food supply. The average income per household per month is $60 and they spend on the average, 42 per cent of their income on food, 26 per cent on education and health services, eight per cent on paying debts, and six per cent on firewood.

“In addition, 46 per cent borrow money to buy food, 41 per cent rely on alternative health care, 21 per cent have migrated to other locations, while 20 per cent send their children out to work and beg. Income from skilled labour dropped from 21 per cent before the crisis in the region to five per cent.

“Twenty three per cent of the households are headed by women and 14 per cent are widows, 40 per cent of women are pregnant and/or lactating, 11 per cent support a member with a mental or physical disability, while 21 per cent include, at least, one member with a chronic illness.”

In his address, the UNDP’s Resident Representative and Country Director, Lamin Beyai, stated that the impact of the conflict in North-East over the last few years had resulted in a protracted humanitarian crisis which led to numerous deaths as well as the mass displacement of an estimated 2,241,484 individuals and 334,608 households.

He stated that the objective of the assessment was to gain systematic and representative information of the socio-economic situation of the local population, of returnees and internally displaced persons settled with host communities and to present a comparative analysis between the affected populations in Adamawa, Borno, Gombe and Yobe states.

“Purposive-random multi-stage sampling in the four states was used to create a representative sample of the affected population,” he added.

FACT CHECK: Is it true that Olagunsoye Oyinlola and Olusola Obada Governed Osun State 2003-2010 on a Christian/Christian Ticket?

How Nigerian Mentality is Killing Nigerian Economy By Kabir Akintayo

In Senegal, PRNigeria Head of Fact-Check, Others Bag Certificates in Investigating...