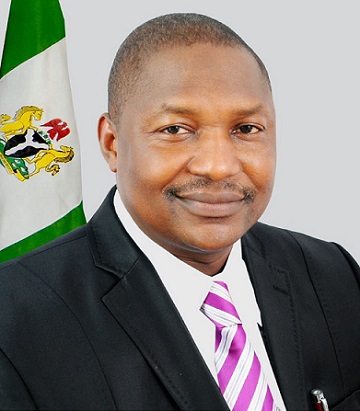 Erstwhile Attorney General of the Federation (AGF) and Minister for Justice, Chief Kanu Agabi, SAN, has written to Abubakar Malami, Nigeria’s current Justice Minister  warning him against actions that could compromise the hearing of alleged unlawful dismissal from office of a formal Acting Director General of the National Intelligence Agency (NIA), Ambassador Mohammed Dauda, pending at the Court of Appeal, Abuja.

Agabi, in a letter to Malami, the Secretary to the Government of the Federation (SGF), Boss Mustapha and the Department of State Service (DSS), alleged that the government’s security agency, which was the defendant/appellant in the case planned to compromise the liberty of his client while the matter was still in court.

Chief Kanu Agabi(SAN), who is the counsel to Dauda, in the letter dated January 11, 2022, noted that Dauda had, following his removal from office and subsequent dismissal from service,challenged same action at the National Industrial Court, Abuja.

The letter, a copy of which was sent to the Inspector General of Police (IG) and DG, NIA, recalled that the National Industrial Court had on October 15, 2020, adjudged the plaintiffs dismissal from office as unlawful and ordered his immediate reinstatement into the service.

According to Agabi, the NIA and its present DG, not satisfied with the judgment, appealed to the Court of Appeal, Abuja division in Appeal No. CA/A/1009/2020.

“In prosecution of this appeal, the appellants filed their brief of argument in response to which our client filed a respondent’s brief. Issues have now been joined in the appeal and same ripe for hearing.

“Prior to the determination of the substantive suit at the Industrial Court, the appellants had earlier appealed against the interlocutory decision of the court, refusing to dismiss the case of our client in appeal number CA/A/1037M/2018, and briefs have also been filed and exchanged in respect thereto.

“In the circumstance, there are two appeals initiated against our client by the agency both of which are still pending,” the letter stated.

Agabi, while arguing that the mere filing of an appeal did not amount to a stay of execution, stressed that the judgment of the Industrial Court was valid and subsisting and all authorities were required by law to give effect to it.

The letter read: “There is no application for stay of execution but even if such an application were pending, it would not operate to our client in a position worse than he was before the delivery of the judgment in his favour.

“Despite the two appeals at the instance of the NIA, the Nigerian media space is consistently awash with news reports suggestive of attempts by NIA to compromise the personal liberty of our client on account of this appeals and or matters connected thereto.

“Arising from the above, we hereby appeal that the Attorney General sees to it that the sanctity of the pending judicial process are not compromised by the NIA, acting either by itself or through any of its sister agencies by arresting, attempting to arrest or by whatsoever means compromising the personal liberty of our client on account of these appeals and or matters connected thereto.”