The Commissioner for Water Resources in Kwara State, Hajia Arinola Lawal, has directed engineers handling various projects on burst pipes and damaged leakages at the Ilorin General Hospital and other areas to complete them on, or before Saturday.

The Commissioner, gave the directive on Thursday, when she paid an unscheduled visit to the General Hospital in order to assess the level of repair works on damaged pipes, and see how adequate water supply could be restored to the hospital.

She said the Governor was interested in the welfare of patients at the hospital, urging the engineers to quickly complete their renovation works.

“The era of bringing or carrying Jerry cans of water around the premises of the hospital has gone. This is the era of change and nothing but positive change in character and also attitude,” she emphasised.

In his response, the Chief Medical Director (CMD) of the hospital, Prof. Abdulfatahi Olokoba, commended the state government and Commissioner for their prompt response. 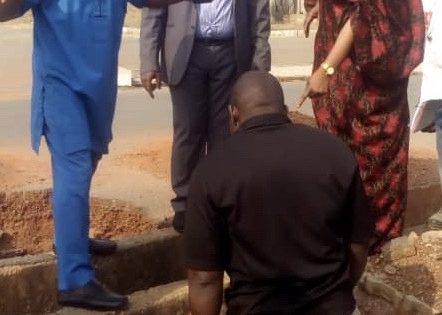 The Commissioner and her entourage also visited Sobi Specialist Hospital, in the State’s capital where she inspected the burst pipes close to Rotamedics Pharmacy in Ita Elepa area, Admiralty Villa at GRA, and a location opposite Presidential Lodge.

At the Sobi hospital, Hajia Arinola, was received by the Chief Medical Director, Dr. Isiaka-Lawal Salmat, and other management staff of the hospital.

The CMD, lamented that water situation in their specialist hospital is nothing to write home about, even as she implored the Commissioner to use her good office to solve their problem of water scarcity.

She disclosed that only the borehole donated by UNICEF to the hospital is still functional.

In a similar vein, Ms. Arinola Lawal, has attributed the persistent vandalisation of government properties at Oloru waterworks to the lackadaisical attitude of past local government administrations.

The Commissioner, observed that the failure of successive LG administrations in ensuring prompt payment of salary to security personnel at the waterworks, resulted to the non-chalant attitudes exhibited by staff guarding the public facility.

She revealed this to journalists after inspecting the Oloru, Bode Saadu and Malete waterworks, all in Moro Local Government Area of the State.

She commended the Chief Security Officer at Oloru waterworks, Mr. Sanni Ishola, and other security personnel in the dam for providing adequate security at the dam.

At Bode Saadu waterworks, Mrs. Lawal, appreciated the Operation Officer, Mr. Iliasu Babatunde and other staff of the Water Corporation, for ensuring constant water supply to people of the area.

The Commissioner who admitted that there are challenges in upgrading some of the vital equipment at the dam such as Dossing Pump Machine, and Alum Clorine Machine, said the Pumping Machine also needed to be serviced for it to adequately supply water to the community.

She however, reiterated the commitment of the State Government to the provision of drinkable water to the people of Oloru, Bode Saadu and Malete.