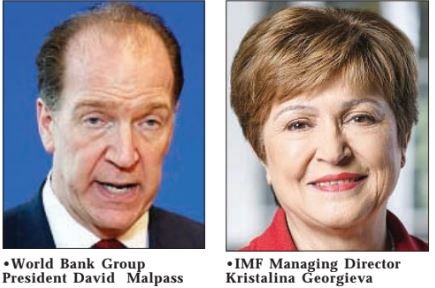 The World Bank report was captured in its January Global Economic Prospects released on January 8.

In the report titled: “Tentative stabilisation, sluggish recovery”, signed by Gita Gopinath, an Economic Counsellor and Director of the Research Department at the Fund, the IMF said the Nigerian economy will grow at 2.5 per cent this year and the next.

“This”, the Fund said, “reflects downward revisions for South Africa (where structural constraints and deteriorating public finances are holding back business confidence and private investment) and for Ethiopia where public sector consolidation, needed to contain debt vulnerabilities, is expected to weigh on growth.”

According to the IMF, low interest rates and reduced trade tensions will likely buoy the global economy over the next two years and help nurture steady if modest growth.

The IMF said emerging market economies in macroeconomic distress related to domestic imbalances will need to continue making the policy adjustments necessary for rebuilding confidence and putting in place the conditions for a return to stable and sustainable growth.

The report said: “In these contexts, ensuring adequate safety nets to protect the vulnerable remains critical within overall existing constraints. High-debt economies should generally aim for consolidation — calibrating its pace to avoid a sharp slowdown in activity — by improving subsidy targeting, broadening the revenue base, and ensuring stronger compliance.”

The Fund said monetary policy should remain accommodative where inflation is still muted. With interest rates expected to remain low for long, macro-prudential tools should be proactively used to prevent the build-up of financial risks.

“Economies with unsustainable debt levels will need to consolidate, including through effective revenue mobilisation.

“To ensure a timely fiscal response if growth were to slow sharply, countries should prepare contingent measures in advance and enhance automatic stabilisers.”

The Fund said a coordinated fiscal response may be needed to improve the effectiveness of individual measures.

“Across all economies, a key imperative is to undertake structural reforms, enhance inclusiveness, and ensure that safety nets protect the vulnerable,” it said.

It advised countries need to cooperate on multiple fronts to lift growth and spread prosperity.

The Fund further said: “They need to reverse protectionist trade barriers and resolve the impasse over the World Trade Organisation’s appellate court.

“They must adopt strategies to limit the rise in global temperatures and the severe consequences of weather-related natural disasters.

“A new international taxation regime is needed to adapt to the growing digital economy and to curtail tax avoidance and evasion, while ensuring that all countries receive their fair share of tax revenue.”

It insisted that while there are signs of stabilisation, the global outlook remains sluggish and there are no clear signs of a turning point.

“There is simply no room for complacency, and the world needs stronger multilateral cooperation and national-level policies to support a sustained recovery that benefits all,” it added.