Though Mrs. Fadimatu Musa Nyako is one of the staff of Adamawa State’s Ministry of Women Affairs, she belongs to the Social Development Department of the Ministry. She is a worker that is not only passionate but discharge her core responsibilities and duties with exceptional passion and undiluted excitement, which is bereft of sycophancy.

At the Government Remand Home Jimeta (her duty post), in Jimeta Local Government Area of the State, Mrs Nyako, and her colleagues have, by remanding and through counselling, helped to awesomely rehabilitate several delinquents and minors who commit or perpetrate crimes.

Mrs. Nyako, in a chat with PRNigeria, said their Remand Home is a beehive of activity on daily basis, as many couples throng their facility to report their marital disputes and other lingering domestic issues.

“It is common to see men bring reports about their wives’ attitude, and vice versa. Also, we receive ‘wayward’ children and adolescents who are been brought to our Remand Home for stealing money or people’s properties. And then, we persuasively, and gently talk to them. We advise them to change their bad habits for their own good,” she said.

Based on their findings, Mrs. Nyako pointed out that a form of separation between husband and wife, whereby the couple don’t stay under one roof, but separately in different towns or places, is the major cause of children inculcating bad, and naughty behaviours from corrupt societies.

As for couple who are antagonistically estranged, workers of the Jimeta juvenile detention centre, assiduously make attempt to reconcile partners who insist on divorce. But if they remain adamant and bent on separation, they are taken to the Remand Home’s court in Adamawa for marital dissolution.

Similarly, parents who desire to see their stubborn children reformed and properly rehabilitated, send them (their children) to the Home after obtaining a court warrant. They are thereafter detained for a period between two weeks to three months for proper counselling.

Officials of the juvenile Home are occasionally deployed to IDP camps across the State to interact with the IDPs with a view to identify their personal challenges and proffer solutions to them.

“In the last two months, we have taken 18 teenagers who were convicted for various crimes such as stealing, into our custody. And by the time their cases are due for hearing, they are taken to the court.

“But if they are able to pay back the money or pay for the items they stole, they are instantly released. Sometimes, we the workers even tax ourselves to contribute money to pay for the money or other items stolen by the minors we remand, so that they can be released.

“Likewise, we also receive teenage girls whose boyfriends and men abandoned them after getting them impregnated. In one month, we get at least five cases of unwanted teenage pregnancy. While we look after the health of the pregnant-girls, we ensure that the men who are responsible for the pregnancies are compelled to marry them after they successfully deliver. But in the event that they cannot do that, we ask them to always provide monthly upkeep for the young ‘mothers’ and their babies,” she said.

The rehabilitation therapist, said even though the State Government provides them with feeding allowance for inmates, they too (staff of the Home) regularly donate their money for the smooth running of the centre.

She added that they also partake in home-visit to monitor the implementation of their counsels, and also see how children who are been bullied or physically molested by their parents, family member and other persons are doing after counselling.

“Though, we don’t handle children or adolescence who engage in drugs and substances’ abuse, or youth restiveness. But if we discover that any delinquent or minor brought to us abuse drugs and engage in thuggery, what we do is to counsel them on the dangers of what they are doing. We urge them to shun hooliganism, smoking, drug abuse and drinking. The fact is, most of the teenagers who engage in stealing are those who are steeped into drug abuse activities,” she stated.

On the achievements recorded by their humanitarian activities, the soft-spoken Adamawa-born lady, said they are always delighted seeing couples heeding their advice, adding that “we have resolved about 50 domestic problems among married men and women since the beginning of this year.”

She explained that their interventions have severally resolved marital feuds and help to restore peace, stability and love among numerous couples. She added: “When abandoned babies are discovered, we are promptly called upon. We take them to our remand home and give them parental care and show them motherly love. By the time the children are two years old and above, we give them out to parents who wish to adopt them as their children.”

Hajiya Nyako, however lamented that financial constraint has hindered them from carrying out several activities at the Home, just as it has also affected them from providing quality welfare for arrested teenagers and orphaned children..

“Again, some men we invite to come talk to us concerning issues affecting their children or spouses often tend to intimidate us. Whenever they appear and see that we are women, they disrespect us. Some of them even quarrel and try to fight us. They will only cooperate with us by the time they notice we want to invite the Police or any other law enforcement officers,’ she noted.

Responding to PRNigeria’s inquiry as to whether they empower the young but able-bodied teenagers they detain, the rehabilitation expert, said their detention Home currently lacks the capacity to train inmates on requisite vocational skills. 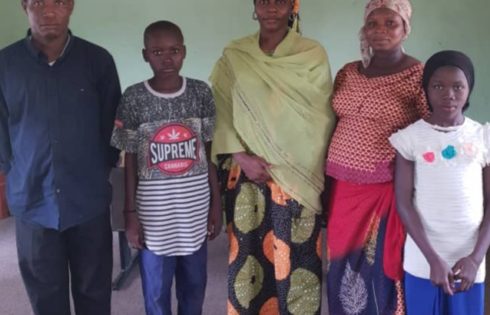 “Before I was deployed here, there use to be sewing machines, and other equipment for learning tailoring, beads’ making, soap production and several others things. But they are no more. Nevertheless, there is need for government to provide machines for training the inmates on lucrative vocational skills and artisanal trades. They should be empowered so as to dissuade them from stealing and committing other crimes after they are released.

“Non-Governmental Organisations (NGOs) and other spirited bodies who have been helping us should not relent. They should continue to provide us with necessary aids, financial grants and vital relief materials. They should directly bring it to us first, rather than taking their donated items to the Ministry. But even more important is that they should monitor the delivery processes of items they donate. This will prevent corrupt officials from diverting them,” she appealed.

Mrs. Nyako, who expressed gratitude to Almighty Allah, said she is ‘extremely’ fulfilled serving humanity, by generously offering both her financial resources and moral support to young persons and children who desperately need them.

She advised couples to be patient, show understanding and tolerate one another, adding that they should also be willing to endure and live together because of their children, rather than opting for the divorce option.

Her words: “Whenever parents separate or choose to divorce, they are endangering the lives of their children, to a very large extent. Among other things, it will affect their children’s upbringing, adequate welfare and induced the absence of parental love and guidance for children. Therefore, they should be open, sincere and faithful to each other. They should politely communicate their feelings and reservations to each other in order to resolve their disputes amicably.”