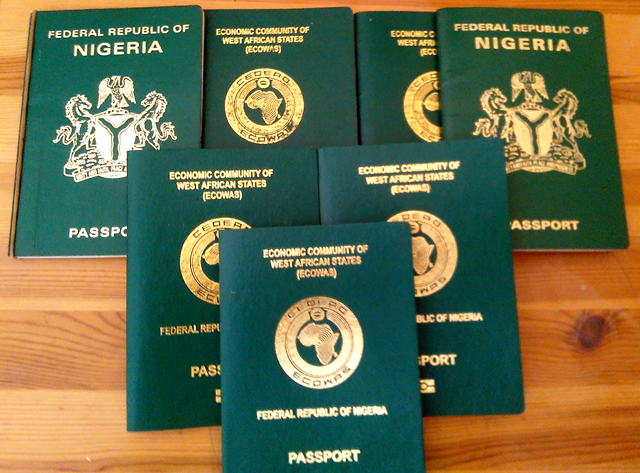 The issuance of Nigerian Passport with 10 years validity will commence in December 2018, the Nigeria Immigration Service (NIS) has said.
Mr Mohammed Babandede, Comptroller-General of NIS, unveiled the plan when he visited Gov. Abiola Ajimobi of Oyo state in Ibadan.
The immigration boss and some senior officers were in Ibadan for the first International Conference on Border In-Transition at the University of Ibadan.
He explained that the new passport would have features that could stand the test of time, adding that it would run concurrently with the old ones.
“We thank President Muhammadu Buhari for approving the new passport with 10 years validity.
“We have also repositioned and improved on our services as directed by the president,” he said.
Babandede said NIS had also improved accessibility to visa through the introduction of Visa-on-Arrival for immigrants whose country was without an embassy.
“We have initiated the centralization of Temporary Work Permit for immigrants who are in the country for a temporary assignment as well as made it easy for women to do a change of name across the states.
“We have also introduced forward-front-border patrol to curtail activities of smugglers and criminals within the border areas.
“We will continue to ensure adequate security of the border and country at large,” he said.
He said that the president had directed that NIS officers should patronize the bushes, unlike the street patrol system which operated before his administration.
In his response, Ajimobi charged NIS to ensure regular monitoring of the nation’s borders for the sustenance of peace in the country.

Ajimobi, who was represented by his deputy, Chief Moses Adeyemo, admonished the NIS boss to initiate policies towards checking illegal immigrants into the country.
He urged them to improve on border policing and ensure recruitment of credible people into the service.