Months have passed since the Niger Delta Avengers have launched an attack on Nigeria’s oil pipelines, yet leaders in the region are warning trouble is brewing in the southern swamp lands. 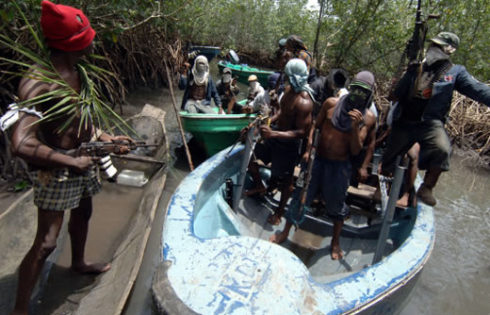 ent Yemi Osinbajo has kept the uprising at bay, with renewed amnesty payments buying calm in the creeks, helping boost production to around 1.7 million barrels per day (bpd) from a low of 1.4 million bpd in August last year.

But now those in the Niger delta say the fragile peace is under strain as the Nigerian government takes time to carry out reforms ranging from the construction of a maritime university to cleaning up oil spills.

“The boys are impatient and they have been disturbing me with a series of telephone calls and messages, with some of them even giving notices to disown us,” Niger delta leader Edwin Clark, who has been negotiating with the Nigerian government, told AFP.

As frustration has grown, Niger delta leaders have threatened to quit the talks, a new militant group announced it will attack pipelines and oil thieves are syphoning off crude in sabotage that is dragging down production, albeit not as dramatically as bombings.

“Government announced in March there will be $10 billion of investment in the Niger Delta, but of course money is tight and it will be a while before people notice any investment, so there is bound to be pressure,” said Gail Anderson, lead Nigeria analyst at energy consulting firm Wood Mackenzie.

Central bank governor Godwin Emefiele described Nigeria’s recovery from its worst recession in over two decades as “fragile”, warning the country “could relapse in a more protracted recession” if the right policies aren’t put in place.

Minimising output disruptions in the Niger delta is key to growth in Nigeria, which relies on oil revenues for infrastructure investments to diversify the economy, Udoma said, explaining that “you have to use what you have to get what you want.”

– New threats –
The Pan Niger Delta Forum (PANDEF), a group of regional stakeholders, had issued a November 1 ultimatum, saying if its demands aren’t met it will pull out of peace talks with government.

But the ultimatum was withdrawn after the group met with government representatives led by Osinbajo on Thursday.

“No more ultimatum. We agreed on many things,” Clark told reporters.

“We are satisfied. We have agreed to work together…” he said.

The presidency said in a statement that long-standing grievances were being addressed, including the opening of the maritime university by next year and approval of two modular refineries for each of the states in the region.

The annual budget for ex-rebels was doubled while funds have also been approved for the clean-up of devastated Ogoniland.

Yet others are calling for an immediate end to the negotiations and a return to violence.

On Sunday, a new militant group called the Niger Delta Revolutionary Crusaders announced they would begin fresh attacks on September 31, saying that Clark and PANDEF are failing the region.

“Our grievance with government is that after the consolatory statement of the government by Professor Osinbajo, nothing is on ground to show sincerity by government,” the Crusaders spokesman said in a statement

There have been a rising number of attacks on soldiers patrolling the creeks, a violent reminder of simmering tension in the oil rich but poverty-stricken south.

From April to July, five marine policemen and seven soldiers spread across the Niger delta have been killed during attacks, while at least 15 have been injured.

– Stolen crude –
The militants may have stopped their blockbuster bombings but analysts point to a recent increase in crude theft as a concerning development.

“They don’t have the support of communities anymore, so you can’t carry out the militant attacks, you can’t bomb pipelines. So the only option is to steal and we’re seeing a resurgence of that,” said Ecobank oil analyst Dolapo Oni.

“We’re just going to see more of the oil thieves trying to break into the pipelines.”

Last week, Shell shut its Trans Niger pipeline because of a “leak” — the preferred euphemism in Nigeria for theft.

But for the cash-strapped Nigerian government, this smaller kind of sabotage is the lesser of two evils, said Oni.

“We’re relatively ok,” he said, “there is still no threat of any major disruptions.” AFP