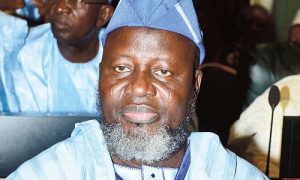 The Minister of Communications, Mr Adebayo Shittu has called on internet stakeholders to put measures in place to tackle all forms of cyber attacks in the country.
Shittu told newsmen in Abuja that everyone as well as organisations was vulnerable to cyber criminals.
He stressed the need for Nigerians to be prepared against such attacks, so that when they occur, the damage to data would be minimal.
He said JAMB site was attacked recently, adding “it is a thing of joy that the National Information Technology Development Agency (NITDA), under this ministry rose to the occasion”.
The minister said the attack on JAMB was an indication that the Nigeria government was at alert and equipped to forestall attacks like this.
According to him, that does not mean government is the one with the sole responsibility to prepare for such attacks.
“Attacks will come against banks and other financial institutions, airlines, hospitals and what have you.
“It behooves on all agencies, companies, establishments to prepare ahead.
“The banking sector for instance, must also take precautions by employing experts in cyber Defence to protect their data.’’
The minister said collaboration was key to combating any attack in the Nigerian cyber space since even highly industrialised nations like the United States was not immune to these attacks.
Shittu noted that cyber criminals were always alert and thinking faster than anyone.
According to him, all hands must be on deck to counter their attacks by making sure we are always prepared.
He said that ICT was a private sector-driven industry, adding that government’s constitutional role was to create enabling environment where businesses could flourish.
“Part of the intervention of the Federal Government is the fact that a Cyber Security Act has been passed by the National Assembly and the office of the National Security Adviser is championing the fight against cyber crimes.
“These are initiatives that we have on ground to assure you that the Nigerian government has not been sleeping in regard to possible cyber criminality in Nigeria.’’
The Cybercrimes Act 2015, provides an effective, unified and comprehensive legal, regulatory and institutional framework for the prohibition, prevention, detection, prosecution and punishment of cybercrimes in Nigeria.