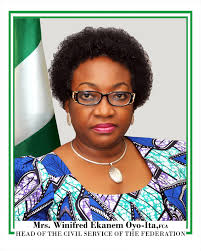 Recently, the Federal Government for the first time unveiled a rare programme aimed at consolidating the Federal Civil Service. It is the three-year Strategic Plan for the Civil Service. The then Acting President, Professor Yemi Osinbajo, who performed the unveiling ceremony at the Presidential Villa had called for a holistic approach in the improvement of the lot of the civil servants in a Change environment, adding that Nigerian public workers have historically offered robust contributions in the development of major sectors of the country. He said that the civil servants over the years have pioneered and implemented some of the most robust and community-driven programmes in the history of our country as such, something must be done to improve their lot.

Undoubtedly, the strategic plan which will run from 2017-2019, and a baby of the ever-articulate Head of the Civil Service of the Federation, Ms Winifred Oyo-Ita, is aimed at repositioning the Federal Civil Service for efficient service delivery to Nigerians and progressive development of the country.

It is the believe of the Head of Service, and indeed the federal government, that the inculcation of entrepreneurship and commercial culture in public servants would transform the service from being perceived as cost centres to revenue earners, positing that the Ministries, Departments and Agencies (MDAs) of the Federal Government would become idea generation powerhouses that would complement the private sectors in creating business opportunities for government.

The plan, according to Oyo-Ita, which is in a four broad spectrum strategy, is anchored on four strategic goals. In her lecture paper titled: “The Role of the Civil Service in a Change Environment: The Change is Now”, Oyo-Ita said that the strategic plan has clearly defined objectives and requisite initiatives for its actualization in consonance with the National Strategy for Public Service Reforms. She said that the Civil Service under her leadership would chart a new course that would be driven by efficiency, productivity, incorruptible and citizen-Centred-EPIC; design and implement an enterprise content management system (ECM); develop entrepreneurship culture and commercial orientation in the civil service and to improve the welfare and benefit packages for civil servants.

The current plan, which has taken several months with painstaking efforts to materialize was characterized by meetings and consultations with other bureaucrats of like-minds, is targeted at changing the face of the civil service at least for once.

Recall too that on her appointment as the Head of the Civil Service, one of such programmes which was so dear to her heart, was the re-enactment of human capital development, indeed training and manpower development. She embarked on tours of such institutions as the Public Service Institute, Centre for Management Development, Administrative Staff College of Nigeria and many others to breathe life into some of them to meet up with the objectives of the federal government’s change agenda for civil servants.

Another innovative programme which she has been so passionate about is the Federal Integrated Staff Housing Programme (FISH), which also saw the ground-breaking ceremony as part of 2016 Civil Service week, to enable civil servants own their houses and live in decent accommodation, a novel idea that would ultimately motivate public servants for efficient service delivery.

At that time last year, Oyo-Ita said the FISH programme with 1,000 housing units at Tafyi District of the Federal Capital Territory was just the beginning as these will be replicated in the 36 states of the federation, adding that the delivery of the affordable houses would include group land acquisition from the FCT administration and the states across the country.

However, she brought to fore the critical obstacles towards affordable housing for civil servants but reassured them that the FISH Inter-ministerial Implementation Committee has been established with relevant financial and international institutions like the Pension Commission, Federal Mortgage Bank, Federal Housing Authority Mortgage Bank, Un-Habitat, Shelter Afrique, to ensure the provision of soft and single digit interest loans for both developers and civil servants. What a novel idea!

Furthermore, she made civil servants realize her vision and focus in a civil service under her watch, emphasizing that under her stewardship, the service will be committed to achieving efficient service delivery to the citizens through the adoption of a new work ethos as encapsulated in “EPIC” which stands for “Efficient, Productive, Incorruptible and Citizen centered”.

The idea is to create an EPIC civil service anchored on four goals and pillars through the development and institutionalization of an efficient, productive, incorruptible and citizen-centered culture in the civil service, develop and implement an enterprise resource management system, develop entrepreneurship culture and commercial orientation in the civil service and finally improve welfare and benefit packages for civil servants. She however noted that the roadmap for the achievement of her vision and focus comprise of 18 clearly defined objectives, 29 initiatives and 157 measurable activities with expected achievements targets.

According to her, these initiatives include Culture change, anti-corruption and transparency initiative, mandatory structured training programme, gender integration at all levels of leadership in the service, enterprise content management, ICT infrastructure development and training.

Others are: Human resource integration to the IPPIS project, Federal Integrated staff housing programme, Salary and compensation review project and transformation of MDAs from cost Centres to Revenue Generating Centres.

To drive home her points in one of the activities to mark that year’s Civil Service Day celebration she called on civil servants to cultivate maintenance culture on equipment, machines and other working tools.

While commissioning the Fitness Centre, Computer and Digital Center including sporting arena all located at the Head of Service, Oyo-Ita noted that equipment notably at the fitness centre were all dilapidated because of lack of maintenance culture and warned them that the era of waste has gone for good.

At the Public Service Lecture to round up the Civil Service Week, she called on Civil Servants to be innovative in order for the service to keep afloat in the increasing sophistication of the society, stressing that “innovation can only be achieved through a sustained programme to enrich our knowledge”.

While harping on the need to imbibe the culture of computer education in order to bridge the digital divide, the Head of Service of the Federation admonished civil servants that they cannot become global citizens if they continue to operate in an analogue environment, calling on them to envision service delivery in a paperless economy, which is the ultimate goal of e-learning initiative. It is hoped that if these programmes and the implementation strategies are sustained, Oyo-Ita will, at the expiration of her tenure, delivered a civil service of not only our time but also for the future!

WTO: Okonjo-Iweala on the cusps of history

Arotile: Curtains Drawn On An Inspiring Face of NAF’s Courageous Women of War‬‬‬‬

PR in Practice: Between Changing Narratives and Attitudes