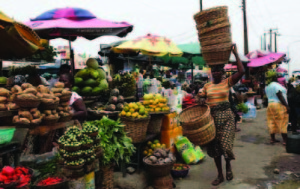 Prior to Nigerian civil war, and immediately after the war, Nigeria was self-sufficient infood production.  The Nigerian agriculture sector had the potential for production of varieties of foods and cash crops with its vast fertile land.

Nigerian economy after 56 years of independence, has witnessed once again a downward trajectory in her efforts to achieve sustainable development. The current world statistics in African economy in the mid-year of 2016 has rated Nigerian economy as second largest economy next to South Africa with Gross Domestic product (GDP) of $296 billion US dollars.

Recently, International Monetary Fund(IMF) observed that by the end of the year (2016) Nigerian economy would be the largest economy in Africa with GDP of $415 billion U.S. dollars. The present recession faced by the economy has led to a negative growth of 2.06% on the first and second quarters of the year (2016). Economic diversification discourse in recent times in the country with regard to policy of ‘BUHARINOMICS’ (i.e. change Agenda) as an attempt to re-engineer the economy is focused on development of agriculture and other non-oil exports. Agriculture has become an arrow head and engine for economic recovery, growth and diversification.

It is a known fact that the right to adequate food and nutrition, to be free from hunger or the right to feed oneself is a fundamental human right under the United Nations charter.

Undoubtedly, there is food crisis and hunger in Nigeria. In an attempt to overcome or tackle the challenges of satisfying the food needs  of the citizenry, successive governments have introduced a number of programmes  and policies  such as Farm Settlement Schemes (FSS), Agricultural Development Projects (ADPs), River Basin Development Authorities (RBDAs), National Accelerated Food Production Programs (NAFPPs), Operation Feed the Nation (OFN), Green Revolution (GR), Back to Land programs, National Agricultural Land Development Program (NALDA) and a host of others to tackle  food  insecurity in the country.

It is lamentable however, that as laudable as these programmes were, the nation had continued to depend on food importation. Although, government is trying to get rid of this practice to feed her ever teeming population,food problems have forced some Nigerians to engage in social vices include ethno-religious conflicts, armed robbery, prostitution, child-trafficking, corruption, etc. a hungry man is an easy target for selfish members of the bourgeois (capitalist class) who would buy their services for a price to foment anarchy within the society.

The question here is, can the Nigerian government resolve this crisis? In my opinion yes is the answer. There is the need to garner political will as government is in a far better position today to tackle these challenges.

It is highly commendable that the present administration has demonstrated its willingness to tackle corruption headlong through the recovery of looted funds. Some of these funds should be channeled to provide farm credit and capital to farmers.

Meanwhile, the government should be part and parcel in regulating prices of the goods and services to ease and alleviate hardships inflicted upon people, because these problems are man-made.

In tackling these challenges, the federal government can afford to reduce import duties and taxes on fertilizer and other farming inputs. The current effort by government through the anchor borrowers’ programme of the Central Bank of Nigeria is highly commendable and should be encouraged and made to be sustainable. These important programmes affecting food security should be backed by appropriate legislation in order to make it difficult for successive administration to jettison them as is the case with past policy somersaults.

There is no doubt that globalization has thrown up a lot of challenges for our economy since we need to open up our economy to others. But this policy has the tendency of dumping agricultural produce of other countries in our land to our detriment as it will kill our own economy.

I am particularly delighted to hear the Minister of Finance that this is not the time to listen to advise of some of the Breton Wood institutions like the International Monetary Fund regarding our budget, most especially as it affects agriculture.   The same institutions also suggest and dictate that the economy of a country like Nigeria must be completely open to the world market as earlier explained above. The end result has been the destruction of industry and agriculture.

It is humble submission that as government takes appropriate steps in stemming the tide of food crisis; efforts should be geared towards revamping, Calabar Export Processing Zone and that of Lagos, Enugu and Kaduna which were extensively structured to specialize in the production of food and cash crops for exports and national food security.