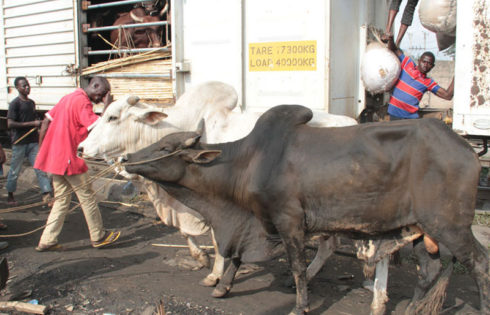 The Federal Government has suspended transportation of cattle from the Northern part of the country to the South, Daily Trust investigation revealed.

The Nigeria Incentive-Based Risk Sharing System for Agricultural Lending (NIRSAL) that initiated the scheme confirmed to our reporter that the cattle movement by rail has been suspended.

Our reporter found the Gusau train station where cattle were transported to Lagos by rail in September 2016, virtually empty and deserted when he visited.

The Coordinator Research & Strategy at NIRSAL, Bello Abdullahi Abba said “Yes, it is true that the historic movement of cattle from the northern to the southern part of the country launched last year has been temporarily suspended due to some technical issues which are being worked on.

“While that process is going on, we are proceeding with another aspect of the Farm to Market scheme – transportation of grains from the north to the ports in the south for export.”

Chairman of the Cattle Dealers Association of Nigeria in Zamfara state, Alhaji Aminu Garba Gusau attributed the stoppage of Gusau to Lagos cattle transportation by rail to ‘selfishness and insincerity’ of stakeholders and organizers of the programme.

He said “We met with various stakeholders in Zaria, Abuja and Lagos. We were asked to gather cows for conveyance to Lagos and after we had done that the train didn’t show up. We lost our capitals to feeding and taking care of the animals.

“We gathered the animals ready for transportation but were disappointed because the train never came back again. We wrote to the Director Operations of the Nigeria Railway in Zaria up till now there is no positive response.

“They are not sincere about the programme they launched it to achieve a selfish agenda and after that has been done they felt they have nothing to do with us again. We are calling on the president to look into the matter since this government is determined to diversify the economy.”

In September last year, the Federal Government through NIRSAL flagged off cattle transportation by rail in Gusau, Zamfara State.

NIRSAL said “The problem with the cattle movement is that there have been challenges with rail tracks and locomotives which led to delays.”
Daily Trust