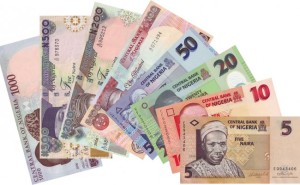 The Central Bank of Nigeria has debunked claims that about 20 per cent of the naira notes in circulation were counterfeit.

The apex bank said in a statement that the security features in the currency had made it difficult for the naira to be counterfeited, adding that less than one per cent of the notes in circulation between January and December last year were fake.

The statement read in part, “The attention of the Central Bank of Nigeria has been drawn to certain spurious and grossly uninformed claims suggesting that about 20 per cent of the naira currency notes in circulation are counterfeited.

“While we acknowledge that no currency in the world is immune from counterfeiting, we make bold to state that the rate of counterfeiting in Nigeria has been very minimal due to appropriate policies put in place by the bank.

“Indeed, our records at the bank clearly indicate that the prevalence of counterfeit notes in Nigeria from January to December 2016 was less than one per cent (0.0014 per cent) or 14 counterfeit pieces out of one million bank notes.

“In line with our core value of proactivity, we have always endeavoured to use strong security features to make it difficult for dishonest persons to counterfeit the currency. In addition to that, we have carried out periodic massive nationwide enlightenment of Nigerians on easy identification of fake banknotes and the reporting of such.”

The statement signed by the Acting Director, Corporate Communications Department, CBN, Mr. Isaac Okoroafor, challenged anyone claiming that 20 per cent of the nation’s currency were fake to support such claims with empirical evidence.

It added, “We, therefore, find it rather curious that a former high ranking official of the CBN would make such bogus and unauthentic claims apparently calculated to destroy confidence in our national currency and sabotage the collaborative efforts of the CBN and the Federal Government at ensuring enduring stability of the financial system.

“The unfortunate implication of the fabricated claim of the said former official of the bank is that it gives the false impression that two bills out of every 10 naira pieces held by an individual is ‘fake’.

“We, therefore, challenge the said former CBN official to make public the empirical evidence suggesting that 20 per cent naira currency in circulation is fake.”

The statement said the apex bank frowned strongly on attempts to counterfeit the naira, adding that it remained committed to safeguarding the value of the naira by ensuring that the nation’s banknotes were not susceptible to counterfeiting.

It added, “We also work constantly with relevant security agencies to monitor and check the activities of counterfeiters.

“Members of the public are, therefore, advised to disregard the false alarm raised by the said former CBN official, be wary of the activities of counterfeiters and report any case of counterfeiting to the police and their banks.”