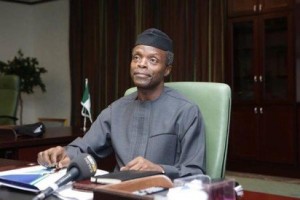 The Special Adviser to the President on Economic Matters, Adeyemi Dipeolu, stated this while reacting to the GDP figures released on Tuesday by the National Bureau of Statistics.
He said though the figures reflected the “slowdown” in the economy for most of 2016, it also showed that the recession “may have bottomed out” because of an improving trend in several key sectors.

“Overall, the Nigerian economy performed better than expected even though we are still in the early stages of recovery. It is indeed noteworthy that overall, 2016 growth was higher with a contraction at -1.5% than the -1.8% predicted by the IMF,” he said

The presidential aide stated: “The recently released data from the National Bureau of Statistics showed that Gross Domestic Product (GDP) contracted by -1.30% in the fourth quarter of 2016. This translated into an estimated growth rate of -1.51% for the full year 2016. These figures reflect the slowdown in the economy for most of 2016 but also show that the recession may have bottomed out because of an improving trend in several key sectors.

“Although the oil sector declined by -12.38% on a year on year basis, this was a relative improvement compared to the third quarter when the decline amounted to -22.01%. This outcome was due mainly to increases in production such that the quarter on quarter growth for the oil sector between the third and fourth quarters was 8.07%. The non-oil sector however declined by 0.33% after showing some resilience in the third quarter when it grew by 0.03% at the height of the recession.

“Agriculture grew at 4.03% in the fourth quarter of 2016 which was a marginal decrease from the 4.54% growth in the third quarter. This is mainly because agriculture (especially crop production, which accounts for the bulk of agricultural production) is highly seasonal, with growth in the third quarter of the year usually higher than the others. Nevertheless, the overall outcome for the year was that the agricultural sector grew by 4.11% for the whole of 2016 which was higher than the figure of 3.72% for 2015.

“The manufacturing sector actually grew on a quarter on quarter basis by 1.89% but declined over the year by 4.32% reflecting the problems that the sector faced in the course of the year due to a combination of factors including the depreciation in the exchange rate and higher energy costs. The metal ores sub-sector grew by 7.03% in Q4 of 2016 as compared to 6.93% in the last quarter of 2015, thus justifying the priority that the Federal Government continues to give to solid minerals.
“The services sector, which accounted for 53.55% of GDP in 2016, experienced a decline in growth by -0.82% over the year as compared to a growth of 4.78% in 2015. This slowdown in the services sector arose from generally fragile economic conditions. This is because its fortunes depend to a large extent on consumer spending and government expenditure which were both adversely affected by difficult economic conditions.”
Dipeolu said the Federal Government’s Social Investment Programme and the “relatively” high level of infrastructural spending in late 2016 as well as 2017 capital spending plans should begin to have a multiplier effect on the economy.
“The trend in nearly all the sectors showed a growth improvement in nominal terms although such effects were outweighed by inflationary factors. The expectation is that this trend and the slowing down of month-on-month inflation will enable an early return to positive growth in the economy. This positive trajectory will also receive a boost from the positive news emerging from other parts of the economy.

“Notable in this regard is the release of the Economic Recovery and Growth Plan by the Federal Executive Council which sets the stage for further fast-tracking of recovery and economic diversification.
“In the same vein, the likely early passage of the 2017 budget estimates would also lend further momentum to economic growth. Similarly, the recent bond issue of $1bn which was subscribed by almost 8 times will reinforce the trend of increasing reserves. Indeed, foreign reserves rose from $23.9bn in October 2016 to $27.8bn in January 2017.”

According to him, “there is a better outlook for revenues from the petroleum sector with revenues set to increase with oil production now over 2m barrels per day while oil prices holding relatively steady at an average of about $55 per barrel. This improved outlook for the oil and gas sector is closely linked to the on-going engagement and dialogue between the Federal Government and various communities in the Niger Delta.”
Daily Trust