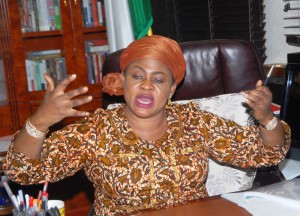 Justice Abdulaziz Anka, who made the freezing order, barred Oduah and the directors of the four companies from making any withdrawal from their bank accounts pending the determination of a debt recovery suit filed against them by Sterling Bank Plc.

The bank, in an affidavit deposed to by one of its managers, Mr. Segun Akinsanya, averred that the debt stemmed from a loan of $10,069,620.25 granted Sea Petroleum and Gas Company on October 8, 2012, to finance one unit 5,000MT tanker vessel.

Counsel for the bank, Mr. Kemi Balogun (SAN), on Wednesday obtained an order to serve court processes on the defendants by substituted means by advertising same in the newspaper.

Justice Anka adjourned till March 20, 2017 to take the preliminary objection filed by Oduah’s companies in opposition to the suit.