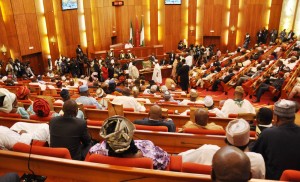 The Senate will this week inch towards passing half of its historic and the much needed economic reform package as six of the 11 priority economic growth and reform bills have been scheduled for public hearings between today and Thursday.

The legislation scheduled for public hearing today includes the National Development Bank of Nigeria Bill, which is intended to provide short, medium and long term financing to participating financial institutions for loans to small scale, medium and industrial enterprises in agro allied businesses, manufacturing, mining; and the National Road Fund Act to fund the rehabilitation and maintenance of the national road system.
Also, public hearing on the Federal Roads Authority Act, which is to manage the federal roads network so that it is safe and efficient, with a view towards meeting the socio-economic demands of the country; and the Customs and Excise Reform Act, which seeks to reform the administration and management of the Customs Service for greater accountability and revenue generation, will hold the same day.

On Wednesday and Thursday, the Committee on Upstream Petroleum will hold public hearings on the Petroleum Industry Governance Bill (PIB).

This long-awaited legislation will establish a framework for the creation of commercially oriented and profit driven petroleum entities that ensures value addition and the internationalisation of the petroleum industry.

Procedurally, legislation is referred to the committee with the appropriate jurisdiction for it to hold public hearing after the bill has passed the first and second reading during the Senate plenary session.

Once the committee submits the public hearing report to the full Senate, the legislation is subject to a third reading, or final passage by members sitting at plenary as a committee of whole.

Commenting on the progress being made on the passage of key bills, the Chairman of the Committee on Media and Public Affairs, Senator Aliyu Sabi Abdullahi, said: “Senate has been on a steady march to the complete passage of the bills which form our economic growth package before the end of the year. We have maintained all along that we would not rest until we did our part to end the recession, spur economic growth and bring relief to the people.”

The Senate’s economic strategy was unveiled on September 20 of this year by Senate President Bukola Saraki.

The 11 bills were part of a wider list of recommendations to President Muhammadu Buhari’s administration on how the National Assembly could work with the presidency to end the recession, restore investor confidence and begin to reorient the Nigerian economy.

Key to much of the agenda is providing greater space in the economy for private sector participation, support for entrepreneurship and above all job creation.

Also commenting on the busy week awaiting the Senate, Saraki said: “This is a very important week for the Senate. We have moved beyond partisanship and we have moved beyond rhetoric. We are now in the realm where we have really worked to deliver something meaningful to the people of Nigeria.”

Senator Abdullahi concurred with the Senate president. “People should really pay attention to the work the Senate has produced. The economic crisis provided the opportunity to work for long overdue reforms in government administration and accountability. The Senate seized upon the opening and now the country is on the verge of truly benefitting from the work of the National Assembly,” he said.