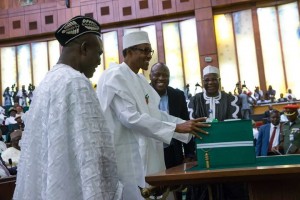 It is no more news that the Nigerian Senate has rejected President Muhammadu Buhari’s request for authorization to borrow about $30 billion. The Senate Leader, Ali Ndume, revealed that the loan request was rejected due to technical issues. One of the technical issues missing is the fact that despite the request said it came with a draft attached but there was no attachment. Thus the lawmakers apparently cannot give anticipatory approval of any bill or document that it had not received.

This may not be a major setback as Ndume said the senate is simply trying to do things following due process. According to Ndume, “in the Appropriation Act we approved that the budget will be financed through internal and external borrowing. The internal borrowing is going on; we also approved external borrowing, so we will look at these areas that are necessary for the funding of the budget.”

The external loan which was described as the biggest in Nigeria’s history with 1.5 percent interest rate spanning 20-30years payment time, is expected to fund targeted projects cutting across all sectors with special attention on infrastructure, agriculture, health, education, water supply, growth and employment generation. According to the president, the proposed programmes would receive about $11.274 billion of the total loan, while special infrastructure projects would take $10.69 billion.

According to the Director-General of Nigeria’s Debt Management Office (DMO) Dr Abraham Nwankwo, the loan would help the government address the infrastructure deficit bedeviling the country. Mr Nwankwo held that tackling infrastructure deficit would force down costs of goods and services on the long run, explaining that the development will have a significant impact on the price level in the economy. Nwakwo further explained that, “when you do this, the Central Bank of Nigeria will set the monetary policy rate low, because all over the world, the central bank knows it has to put the monetary policy rate high enough to catch up with inflation rate, otherwise we will be talking of negative real rate of interest which destroys the economy. So the way to go about it is that you have adequate infrastructure, power road, transportation ICT. All these make the cost of production in the economy much lower and when this happens, the cost of goods and services will be lower and then inflation will start coming down.

And if inflation comes down, the monetary policy rate will be lower and this will translate to a lower lending rate. That is the sequence.” The Minister of Finance Kemi Adeosun and her Budget and National Planning counterpart, Udoma Udoma, echoed similar narratives as the latter revealed added that the plan would be funded majorly through a number of sources, namely sale of some national assets and advance payment by joint venture operators for license renewals.

It would be recalled that two years ago, Abraham Nwankwo warned that the federal government should apply caution as regards accumulation of debt which is already to the tune of N8.9 trillion for domestic debt for both the Federal and the all states including FCT and $9.38 billion for external debt as at 2014. Nwankwo then revealed that, “in spite of the fact that because of the rebasing of the economy, our debt to GDP ratio has fallen showing that we have more capacity, we are not going to borrow without caution. Indeed, we are going to be more cautious. The reason is that the tax revenue GDP ratio is low because it seems that many economic agents do not pay their tax according to their output so the challenge also is for the mass media and other professionals to continue to find ways of encouraging greater compliance with tax payment”.

Just two years ago, a request for external borrowing of not more than $1 billion by President Goodluck Jonathan to tackle security challenges in the country was approved by the Senate following the consideration of the report of the Joint Committees on Finance, and Local and Foreign Debts on the loan request at plenary. The requested loan was expected to be for procurement of helicopters, ships, armament, hardware and other facilities and equipment to improve the fight against insurgency in the Northeast. Mr. Jonathan said the $1 billion will also be used to train the military and other security officers.

The request was eventually approved amidst rowdy session despite criticisms and questions regarding the management of Nigeria’s defence budget, which gulps as much as 20 percent of the entire budget. The Nigerian government justifies the about N1 trillion spent on security on the growing insecurity situation in the country. However, the military and security officials are still considered ill-equipped to tackle Boko Haram insurgency. Unfortunately, up till today the nation is still battling the insurgency menace in the North-east in concomitant with other problems of insecurity amidst the alleged mismanagement of funds meant for the purpose of fighting the insurgency that have scuttled development in the northeast region of the country.

Not long after the approval of the loan, the then Minister of Finance, Ngozi Okonjo-Iweala, said the Federal Government has borrowed about N473billion to pay salaries and fund the 2015 budget. Just like the current administration, the previous administration blamed the rise in borrowing level from N570 billion to N882 billion, on the decline in oil revenue in late 2014, which accounted for 50 per cent cut in the total federally collectible revenue as well as the low revenue receipts from non-oil sources. Similarly, the present Minister of Finance Kemi Adeosun earlier in the year admitted that the ministry cannot afford to pay the N1.2 billion requested by its workers, while she confirmed that the Federal Government was already borrowing funds to be able to pay the N165 billion a month needed to cover civil service salaries.

This is apparently why the latest data released by the Debt Management Office (DMO) showed that Nigeria’s debt burden has increased by nearly N4 trillion in the past six months N12.6 trillion at the end of 2015 to N16.3 trillion as at June 30, 2016. The country’s total external debt stock, owed by states and the federal government stood at N3.19 trillion by June 30, while domestic debt incurred by the federal government stood at N10.61 trillion. Domestic debts taken by state governments stood at N2.5 trillion, as Lagos, Delta, Cross River, and the Federal Capital Territory top the debtors list.

Despite the commendation of the loan request by former Central Bank of Nigeria Governor, Titus Okunronmu, recent history of borrowing may not be sending the right messages as regards the achievement of the various intentions usually given for borrowing. The analysis that Nigeria’s debt Gross Domestic Product ratio is still less than the 56% of total public debt ratio for countries in Nigeria’s peer group led the government to rapidly liberalised external borrowings until repayment became a challenge and the Nigerian government was subsequently “bullied” to ultimately part with about $18 billion to obtain partial debt forgiveness from creditors in 2006.