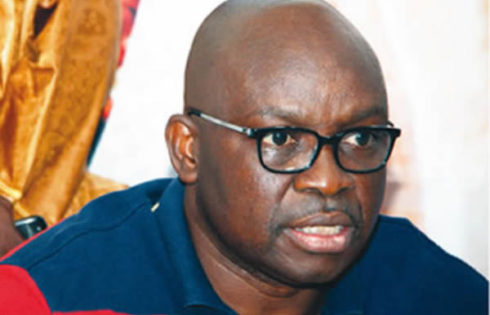 Ekiti State Governor Ayodele Fayose has urged Senate President, Bukola Saraki not to support the plan by the Federal Government to obtain a $29.96 billion foreign loan.

He said the loan would further ruin the country’s economy. In a statement by his Special Assistant on Public Communications and New Media, Lere Olayinka, Fayose asked: “What is the economic sense in taking over N12 trillion loan so as to be able to spend more money during the economic recession? How can a nation be proposing to spend more money when its income has reduced considerably?

“Yes, it is being argued that nations in recession must spend to get out of it, but in the case of Nigeria, how do we pay back when as at today, 30 per cent of our income is being used to service debt?”

The statement continued: “When the Senate unanimously threw out President Muhammadu Buhari’s request for the loan, many Nigerians heaved a sigh of relief and hailed the legislators.

“However, unfolding events in the last few days suggest a dangerous alliance between the presidency and the Senate President to ensure the approval of the loan at all cost.

“Feelers getting to the public suggest that the ongoing Code of Conduct Tribunal (CCT) trial of Saraki is being used as blackmail to get him to back the $29.96 billion loan.

“Instead of collaborating with the presidency to plunge Nigerians into the bondage of debt, Saraki should pitch his tent with the masses.”

Meanwhile, Bayelsa State Governor, Seriake Dickson has said the leadership of the Peoples Democratic Party (PDP) is pleased with the role being played by Fayose in deepening democracy in the country.

He said strong opposition as that of Fayose was needed to protect the country’s democracy and prevent fascism.Dickson spoke in Ado Ekiti yesterday at the palace of the Ewi of Ado Ekiti, Oba Rufus Adeyemo during a visit to the state to felicitate with Fayose on his 56th birthday.