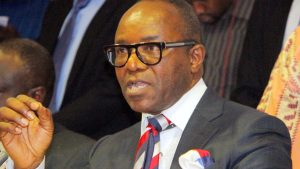 Nigeria will consider the sale of the country’s four refineries only after they have been rehabilitated to work efficiently, minister of Petroleum Resources, Ibe Kachikwu, has said.

Kachikwu said yesterday at a public presentation of short and medium term priorities to grow Nigeria’s oil and gas industry tagged, ‘7BigWins’, that no investor would offer serious money for the refineries in their present state.

There have been suggestions recently by prominent Nigerians for key assets, including the refineries, to be sold to raise seriously needed funds to reflate the economy.

“The feeling of the Federal Executive Council (FEC) and the President is that we should first get the refineries to be efficient before we talk about privatisation, otherwise we will be selling scraps,” the minister said, adding that union-related  issues would also have to be addressed.

He said President Muhammadu Buhari would meet leaders of the Niger Delta in Abuja next week in an attempt to end insurgency in the oil-producing region.
“This planned meeting shows the level of interest the president has to ensure peace in the area,” he said.
Kachikwu told participants at the event that Nigeria’s oil output stood at 1.8 million barrels a day, adding that the government hoped to get back to 2.2 million bpd next year – the level seen at the start of 2016.

He further stated that the country would ensure that it found every oil that is available in every part of the country, with increased private sector participation, and to raise $5 billion and $20 billion in the short and long term respectively, for the federal government

In addition, Kachikwu stated that the government planned to set up a fund of about $10 billion for the development of critical infrastructure in the Niger Delta and also for the growth of the region.

“The whole idea is to set up a fund that is not tied to budgeting. Find international organisations and identify their willingness to put in money into the Niger Delta; be able to negotiate with state governments some percentage of what they have to put into this fund,” the minister reiterated.

He said the Presidency had approved a roadmap that would transfer the responsibility of ensuring security in the Niger Delta region from the military and other security agencies to oil companies operating in the region.

He also stated that the federal government was considering stripping states of some of the proceeds of the 13 per cent derivation funds to be used in the development of oil-producing communities.