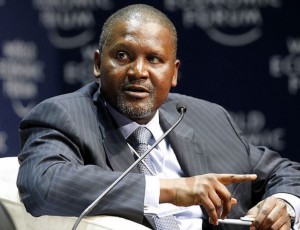 …Plans to venture into dairy production

The President, Dangote Group, Aliko Dangote has stated that Nigeria’s quest to diversify its economy away from crude oil cannot be achieved if there is little or no foreign exchange available for private sectors to work with.

Dangote called on the managers of the economy to inject fresh funds to the tune of about $15 to $20 billion, to bring the economy back on track, saying that this would go a long way to restore investors’ confidence and take the Nigerian economy out of recession.

Africa’s richest man who said this during a courtesy visit by Executive MBA students of the Lagos Business School (LBS) to his refinery in Lagos, expressed hope in the country getting out of its present precarious state sooner than expected, but stressed that this feat can only be achieved if the right support is given to the Organised Private Sector (OPS) of the economy in terms of adequate foreign exchange supply, infrastructural development, consistent and favourable economic policies.

“Nigeria has what it takes to be great again. I believe so much in the Nigerian economy and if the right things are done, we should get out of the economic recession by 1st quarter in 2017. The private sector is huge and I think we will get out of the recession as soon as possible,” he said.

However, he said 98 per cent of Nigeria’s demand for dairy products is currently being imported, stressing that plans are already on ground to turn around the nation’s milk industry in the next three years.

“We are already discussing with the Central Bank of Nigeria (CBN) to kick start this project. We believe we can do a lot to bridge the importation gap developing local production of this product because we have the competitive and comparative advantage,” he said.

In his presentation tagged: ‘Role of business in driving sustainable development in Africa-The story of Dangote group, he said the group has grown from a commodity trading company to a more diversified conglomerate over the last two decades, adding that his company has been underpinned by five key pillars which he said is to provide basic needs, substitute imports and earn foreign exchange from exports, execute efficiently new plants and technologies, operate effectively by entering new markets with high quality products, entering into strategic partnerships and investing in human capacity development.

According to him, Dangote group is a leader in the new breed of African multi-national conglomerates, saying that his company has recorded a lot of progress over the years.

“We are top 10 in Africa and top 400 globally. We are globally competitive, growing local capacity, manufacturing quality products, rapidly transforming from a Nigerian company to a dominant African brand and our revenues and profitability have continued to grow,” he said.

He stated that the group is driving six major projects which will create 250,000 jobs and provide foreign exchange earnings, while also saving about $15 billion for the country.
“We are investing a total investment of $20 billion across the six projects in the country,” he said.

Also speaking at the event, the Director Construction, Project Scheduling and Monitoring, Dangote Petroleum Refining and Petrochemicals FZE, Mr. Henri Riems, said the economic benefits of the refinery when completed would fetch Nigeria over $5.5 billion per annum from foreign exchange earnings through export and over $7.5 billion per annum would be saved from import substitution.

He said other benefits of the refinery to the economy include professional development, technology, generation of power, production of petrochemicals, saving of foreign exchange against imports, increased demand for domestic crude, increased revenue to government, foreign exchange from exports, development of local areas and ancillary industries and unhindered availability of products.