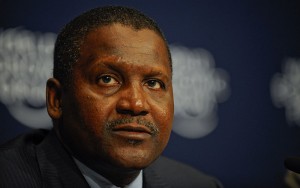 The profit after tax of Dangote Cement Plc dropped by N24.47bn in the nine month, ended September 30, 2016.

The firm, however, recorded increased revenue of N442.09bn in the last nine months, according to the report filed at the Nigerian Stock Exchange.

The revenue for the Q3 2016 was 20.97 per cent higher than the figure recorded during the same period in 2015, despite the harsh operating environment, the company said. It attributed the development to the management’s strategy to leverage its pan-African status.
The report indicated that Dangote Cement increased the revenue by N76.642bn from N365.450bn it made during the same period in 2015.

The crisis of foreign exchange gulped a huge amount of its revenue, as it spent N231.684bn on the cost of sales during the review period of nine months 2016 as against N138.694bn spent on the same purpose last year, the report indicated.

Reflecting on its outlook, the Managing Director of the company, Onne Van der Weijde said the management was confident of delivering strong growth this year despite the challenging economic conditions facing Nigeria and the rest of Africa.

He said, “This price increase will have an immediate and positive impact on margins in the Q4, as will the elimination of Low Pour Fuel Oil from our fuel mix, as we increase our use of coal and higher gas levels return.

“We do not expect to use the LPFO again this year. From January 2017, our use of own-mined coal, sourced in Nigeria and paid for in naira, will further improve margins and significantly reduce our need for foreign currency.

“As we have previously made clear, our focus will be to improve margins through cost controls and the adjustment of prices. We have new capacity coming onstream in Congo and Sierra Leone and expect Tanzania to increase its market share in the coming months.

“Foreign exchange constraints in Nigeria have made us reconsider the pace of our expansion and we now believe that a longer-term building programme will enable a more measured approach that balances our ambition for growth with the realities of obtaining foreign currency in this difficult environment.”