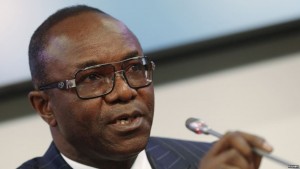 …Once again Kachikwu’s International Diplomacy Yields Dividends as oil prices surge
After about forty eight (48) hours of a grueling meeting of the Organization of Petroleum Exporting Countries held in Algeria, OPEC in Algiers, the oil cartel agreed to a landmark deal that will effectively cut production to 32.5 million barrels per day from around 33.24 million, with levels of output for each member country to be determined in November 2016.

This will be the first time in eight (8) years that OPEC would be reaching such an agreement. This could be loosely tied to the role that has been played by member countries, including Nigeria, in refocusing OPEC to work harmoniously in identifying needs and challenges that are peculiar to the body and surmounting them. A key challenge being the low price of oil in the international market which has affected the global economy with most OPEC member countries feeling the heat.

OPEC member countries reached a consensus in the agreement where three countries are exempted from the production cuts and they include, Iran, which just had its economic sanctions lifted earlier in the year, Libya and Nigeria who have had some of their oil facilities damaged by terrorist attacks in recent months.

It would be recalled that Dr. Emmanuel Ibe Kachikwu, Minister of State for Petroleum Resources, who led Nigeria’s delegation at the meeting argued for the exemption of Nigeria from the production cut. The concession was given considering the recent challenges the country has been through, due to vandalism of oil and gas infrastructure which has negatively impacted the country’s ability to produce oil optimally in the recent past

This deal will obviously enhance the prospects for the energy industry with the impacts already being felt as oil price jumped more than 5 percent in New York after the agreement was reached. A steady increase in oil prices which is one of the advantages that the deal will produce would most likely contribute positively to the revival of the economies of member countries presently undergoing challenges which Nigeria is a part of. However, many of the details of the production cut deal are still being worked out by member countries and the group won’t decide on targets for each country until its next meeting at the end of November 2016; a meeting the Honorable Minister of State for Petroleum Resources, Dr. Emmanuel Ibe Kachikwu, would be representing Nigeria and her interest.

This groundbreaking deal is coming at a time when Dr. Ibe Kachikwu the Minister of State for Petroleum Resources, recently played a key role to clinch the top job at the Organization of the Petroleum Exporting Countries, OPEC for Nigeria with the appointment of Dr. Mohammed Sanusi Barkindo as the Secretary General of the Organization. This meeting was the first official meeting of OPEC to be organized by the new Secretary General since his official resumption on 1st August, 2016.