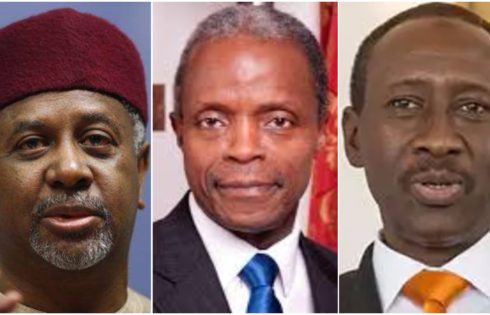 NACTEST Osinbajo and the Revised Counter-Insurgency Campaign
By Yushau A. Shuaib

The Vice President of Federal Republic of Nigeria is not just an ordinary person. Professor Yemi Osinbajo is an accomplished scholar, award-winning legal practitioner, a respected Church Pastor and man of seeming impeccable character. He and his family have displayed enviable character of humility and simplicity.

As the second most powerful citizen in the current administration of President Muhammadu Buhari, Osinbajo serves as the Chief Coordinator on the Economy akin to Coordinating Minister on the Nigeria’s economy. He heads the economic team and to some extent, largely endorses and appoints members into the team.

With such fantastic attributes and excessive power, especially on the economy, one should have expected that he would not behave typical of Nigerian politicians, who, rather than facing and addressing the real economic realities would accuse oppositions or previous administrations for every fault.

While representing President Buhari at the launching of the revised National Counter Terrorism Strategy (NACTEST), Professor Osinbajo repeated the blame-games, the feature of the administration by claiming that the escalation of war on terror was the handiwork of corrupt military officers and political leaders in the previous administration. (www.goo.gl/V212XF)

The blame game as usual continued as he said little in his speech about NACTEST. While castigating previous governments of sabotage, the media is currently awash with a report that a Brigade Commander and some soldiers were selling arms and ammunition to Boko Haram terrorists in the current dispensation. Such reports do not mean that the ongoing military operations are failure. (www.goo.gl/XnPdzx)

It is nevertheless interesting to note that the current National Security Adviser, Major General Babagana Monguno (rtd) went straight to the point to disclose the benefit of the revised NACTEST strategy. He explained what organisations and individuals could do to help in its implementation in order to reduce the risks of terrorism and ensure that people go about their lives freely and with confidence. (www.goo.gl/rUyQz1)

According to Monguno, “NACTEST is organised around five streams aimed to forestall, secure, identify, prepare and implement with key objectives and indicators to effectively ensure monitoring and evaluating successes at each stage.”

Also speaking, the Coordinator, Counter Terrorism Centre (CTC), Commodore Yem Musa, said that ONSA in furtherance of the national counter terrorism efforts, developed the “National Terrorism Levels” document to guide MDAs on measures to be taken on receipt of information on a likely terrorists’ attack.

Musa said that the document, which outlines the alert levels and the actions to be carried out when a terrorism alert level is declared is in 5-levels including: Critical (Red) – Attack is imminent; Severe (Orange) – Attack is highly likely; Substantial (Yellow) – Attack is a strong possibility; Moderate (Blue) – Attack is possible but not likely; and Low (Green) – Attack is unlikely.

What was not disclosed at the launching is the fact that NACTEST was a programme conceived and introduced in 2014 by the former National Security Adviser, Sambo Dasuki to counter terrorism under soft-approach programme. While unveiling NACTEST in March 2014, the then NSA Sambo Dasuki said the strategy was developed by his office in collaboration with international partners, experienced academics and selected non-state actors. He said that the strategy was developed taking into account the root causes of terrorism, adding that the approach was to understand the problem in order to apply appropriate solutions.

Dasuki added that NACTEST focused on key points including increasing the capacity of government institutions and relevant agencies in handling extremists. The strategy was developed to offer a key blueprint for law enforcement agencies to combat terrorists.

During an interaction with the media, Dasuki had said that “What we have learnt is that there is not one particular path that leads to terrorism; rather, there are many often complicated paths that led to terrorism. The NACTEST seeks to prevent attacks before they happen by preventing our people from becoming terrorists in the first place.”

The NACTEST programme utilises existing structures within and outside government to deliver targeted programmes and activities that further the overall objective of stemming the tide of radicalism. The soft approach programmes provide the country a framework that identifies roles and responsibilities of every segment of the society.

With the revised NACTEST document under current NSA Babagana Monguno, there should be a sustained monitoring and evaluation framework that would track the implementation of each stream of the CVE programme.

The revised document is a further consolidation of counter terrorism efforts. It should also ensure that the measures being adopted on counter-terrorism processes conform to dictates of the law and adhere strictly to the rules of engagement and human rights norms as was canvassed in the past.

The current Office of the National Security Adviser must be commended for not only initiating new direction in intelligence gathering and coordinating counter insurgency campaign but also for revising the content of NACTEST to ensure its effective deployment.

It is necessary to caution political office holders to be conscious of their utterances in their blame-games campaigns, especially on security issues. One does not need to be a professor in law to know that it is morally wrong and a crime to criminalize innocent officials that were/are not convicted by competent court of law. Majority of officers that served in the previous administration are also serving in the current administration diligently and responsibly unless they are recently retired. Terrorism issues should not be politicised, because history is the best judge even if some are forgetful.

KWASSIP and the Battle Against Poverty In Kwara

What does Saliu Mustapha’s drive for youth empowerment mean for Kwara?

Buhari Seeks Increase In Volume Of Trade As Nigeria Records Over...