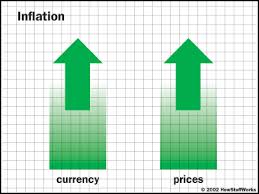 The National Bureau of Statistics (NBS) has said that Consumer Price Index (CPI) which measures inflation has further climbed five notches as it hit 17.6 percent in August compared to 17.1 percent recorded in the month of July 2016.

In its Consumer Price Index report released in Abuja, and made available to Economic Confidential, NBS stated that increases were recorded in all COICOP divisions which contribute to the Headline index reflecting higher prices across the board.

According to the NBS, the major divisions responsible for accelerating the pace of the increase in the headline index were Housing, Water, Electricity, Gas and Other Fuel, Education and Transportation Services.

The Food Index rose by 16.4 percent (year-on-year) in August, up by 0.6 percent points from 15.8 percent recorded in July. During the month, all the major food groups contributed to the increase in the Food sub-index, however the pace of increase was slowed by Fruits, Potatoes, Yam and other Tubers as well as Oils and Fats, which reported slower increases during the month.

Furthermore, imported foods as reflected by the Imported Food Sub-index increased by 0.2% points from July to 20.7% in August.

The nation’s statistical authority also said that price movements recorded by the all Items less farm produce or Core sub-index increased by 17.2 percent (year-on-year) in August, up by 0.3 percentage points from rates recorded in July (16.9 percent).

During the month, the highest increases were seen in Solid fuels, Vehicles parts Books & Stationeries and Clothing and other articles of clothing.

On a month-on-month basis, the Headline index rose by 1.0 percent in August, marginally lower than the 1.3 percent recorded in July. This is the third consecutive month of a slower pace of increase in the Headline Index.