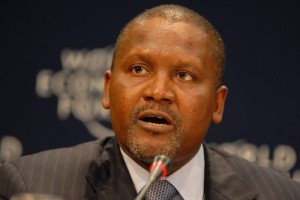 The Dangote Foundation has spent over N4.5billion in the North-east as donations to ease the plight of Internally Displaced Persons (IDPs).

This was disclosed by the president of the foundation, Aliko Dangote, at a press conference in Abuja.

Dangote announced a new partnership with the lead singer of the rock group, U2, who is also the co-founder of the ONE Campaign, Paul David Hewson, popularly known as Bono, to drive international advocacy aimed at creating awareness on the plight of IDPs, poverty, malnutrition and increased funding for the health sector.

Dangote also announced that he would join the board of ONE after meeting with Vice President Yemi Osinbajo, where they discussed the need to address the malnutrition and humanitarian crisis in the North-east.

Meanwhile, a statement by the Senior Special Assistant to the Vice President on Media and Publicity, Mr. Laolu Akande, said Osinbajo told the delegation that the federal government would welcome a global partnership that would ensure a concerted and focused international response to the humanitarian crisis in the North-eastern region.

Bono leads the ONE campaign group, an advocacy organisation with more than seven million people around the world taking action to end extreme poverty and preventable diseases especially in Africa.

It has on its board people like Mo Ibrahim, Bill Gates, Michael Bloomberg among others. It was founded in 2004.

Addressing members of the delegation that included former UK Development Secretary Douglas Alexander, Osinbajo said: “It is very important that you chose to come and offer some partnership. This is great and we are pleased…Partnership is certainly the way to go.”

He said no matter how prepared a country could be, handling the kind of crisis in the North-east with two million displaced people including children would prove a difficult task.
According to him, a global partnership to address the situation should be coordinated and more focused on what was required to be done, for instance, in addressing the issue of malnourished children and not attempting to do too much things at once.

Speaking earlier, the Irish-born artist, Bono, said he had visited some of the IDPs, saying “We want to be useful to you.”