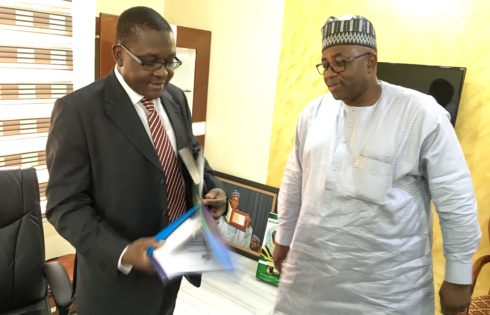 The Acting Managing Director and CEO of Nigeria Export Import Bank (NEXIM) Mr. Bashir M. Wali, has called on the Bauchi State Government to collaborate with it towards boosting export-oriented investments in agro-processing, solid minerals and solid minerals, especially under the N500billion Export Stimulation Facility (ESF) and the N50 billion Export Rediscounting and Refinancing Facility (ERRF).

Mr. Wali made the call during a courtesy visit to the Bauchi State Governor Mohammed Abdullahi Abubakar at the State Laison office in Abuja.

Governor Abubakar expressed his appreciation for the august visit and provided a snapshot of Bauchi State, especially its resources and other potentials.

According to him, Bauchi State covers a total land area of 49,259.01 square kilometres which represents about 5.3% of Nigeria’s total land mass, making it one of the largest states in the country.

He informed Mr Wali that agriculture is the mainstay of over 80 per cent of people who reside in both urban and rural areas with products ranging from maize, rice, millet, groundnut and guinea corn. Additionally, cattle and other livestock are reared at a commercially viable level.

In terms of solid minerals, Governor Abubakar indicated that the State has commercial mineral reserves comprising of Amethyst, Gypsum, Lead/Zinc, Uranium, Limestone, Kaolin, Gypsum, Antimony, Iron Ore, Gold, Marble, Columbite and zinc, precious stones like Sulphur, Amities and Aquamarine among others. In addition to this, Bauchi has a manufacturing sector covering Iron and Steel, Water, Ceramics, Food and Beverages etc.

The Governor, however, identified certain constraints that have facilitated the commercial exploration of the solid minerals in the State. These include the issues of licensing – considering that solid minerals is on the exclusive list; the paucity of data in terms of certification of available deposits; and the need to efficiently organise artisanal mining as well as establish beneficiation centres to boost the solid mineral value-chain in the State.

Concluding, Governor Abubakar noted that one of the most viable potentials in the State is the tourism sector. “Bauchi is home to the Yankari Game reserve (the biggest game reserve in West Africa), occupying an area of 2,224.59 square kilometres. Other notable tourist centres in the State include the Premier Game Reserve, Rock Paintings, the First Mining Beacon of Tilden-Fulani, the Panshanu Stone Heaps, Lame-Burra Game Reserve, Sumu Wildlife Park, Geji Rock Paintings of the Neolithic age, the Babban Gwani Architectural Designs at Bauchi and Kafin Madaki and the International Bird Sanctuary of Udubo district”.

Mr. Wali expressed his appreciation to Governor Abubakar for receiving the Bank team at short notice, and informed that the Bank was established to promote export diversification and deepening the non-oil export sector. Accordingly, the Bank’s current strategic initiatives are targeted towards boosting employment creation and foreign exchange earnings in the Manufacturing, Agro-processing, Solid Minerals and Services – Tourism, Transportation and Entertainment sectors. This is the MASS Agenda of NEXIM Bank.

Mr. Wali used the opportunity to inform the Governor that NEXIM Bank recently launched a N500 billion Export Stimulation Facility (ESF) and the N50 billion Export Rediscounting and Refinancing Facility (ERRF) which were provided as intervention funds by the Central Bank of Nigeria (CBN) as part of efforts of the Federal Government to address the persistent overdependence of the economy on revenue from crude oil export.

However, considering that NEXIM Bank does not lend directly to Government institutions, Mr. Wali suggested that the Government should explore funding options with the Islamic Bank, Afrexim Bank or other such institutions at that level; while commercial proposals would be welcome from the private sector entities in the State for accessing facilities from the Bank. He subsequently presented the ESFRRF guidelines documents to the Governor.

Thanking the NEXIM MD, Governor Abubakar said that the courtesy visit was a step in the right direction and promised that arrangements would soon be put in place to have NEXIM Bank formally come to Bauchi State to meet with the States officials towards taking the conversation forward.