Home Editors Pick N’Delta Avengers: We’ve Not Nominated Anyone Including Soyinka to Negotiate on Our... 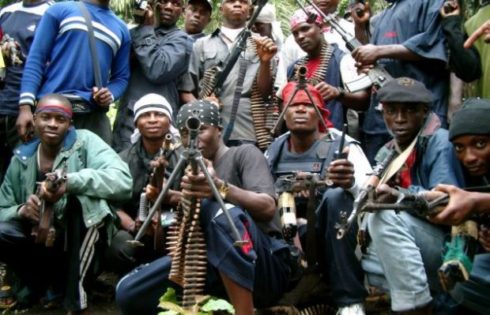 Niger Delta Avengers (NDA) at the weekend said it did not nominate any personality, including Nobel Laureate, Professor Wole Soyinka, to lead its dialogue team with the federal government.

It described the report that it had put forward Soyinka as the head of its contact to dialogue with the federal government as a lie of the century.
According to a statement signed by its spokesperson, Mudoch Agbinibo, NDA said it was amazed that Soyinka has been taking on the jugular by enemies of the region because of his restructuring stance and need to heed the Niger Delta agitations positively.

“We are amazed that Soyinka, has been taken on the jugular by enemies of the Niger Delta because of his belief that the government of the day should understand the need to restructure and listen to the Niger Delta agitation positively,” it added.

The group also accused the Okah brothers, both of whom are serving time in Nigeria and South Africa prisons, of using disorganised characters from the Niger Delta region to impress the “powers that be at Abuja.”

NDA, while reiterating its support for the Chief Edwin Clark-led Niger Delta Elders and Stakeholders’ conference committee to lead the pan-Niger Delta negotiations/dialogue team, stated that it was ready for talks whenever the federal government is ready.

“The NDA cannot be teleguided by Mr. Charles Okah and Henry Okah from their respective prison cells using disorganised characters of the All Progressives Congress (APC) from the Niger Delta to impress Abuja,” the group said.

The militant group said further: “We are not unaware of the creations of the Nigerian intelligentsia community and security apparatus to sustain the Niger Delta struggle to bloat their pocket and credibility.

“We are amazed that Soyinka, has been taken on the jugular by enemies of the Niger Delta because of his belief that the government of the day should understand the need to restructuring and listen to the Niger Delta agitation positively.

“That if, we the NDA have named Soyinka and some incredible names to advise and lead any group is the Lie of The Century! They says when an handshake goes beyond the elbow it has turned to another thing; amazingly, the handwriting are so clear that our noble laureate name is going the infamous way, as he is being named along as an adviser with some unscrupulous characters as NDA dialogue team with the government of Nigeria.

“Putting the records straight; the name/names parading as factions of the NDA are just the figment of some persons protecting their jobs and hell bent on derailing the wheel of progress in the history of Nigeria and the Niger Delta agitation,”, it added.

The militant group declared: “Our strike teams and command structures have not at anytime contacted these Nigerians at any time to advise or lead any contact with the government of Muhammadu Buhari on the Niger Delta agitation.

“We have shown our respect and restraints to personalities that have been too fixated to impress Abuja in the name of the Niger Delta struggle since the beginning of “Operation Red Economy ” ignorantly or willingly.

“We are not unaware of the creations of the Nigerian Intelligentsia community and security apparatus to sustain the Niger Delta struggle to bloat their pocket and credibility.
“The NDA has unequivocally given its tacit support to the Clark’s Niger Delta Elders and Stakeholders conference committee to lead the pan-Niger Delta Negotiations/Dialogue Team, whenever Nigeria shows readiness.”

The group described the warning to Niger Delta agitators to negotiate or face Boko Haram treatment credited to President Buhari, while discussing with the Japanese leader in Nairobi, Kenya as reckless and pre-judicial to the peaceful resolution of the renewed militancy in the region.

According to a statement signed by IYC spokesperson, Eric Omare, the Ijaw youths maintained that there was no basis for that statement considering that the circumstances of the Niger Delta are different from the Boko Haram crisis.

“We have just read a statement issued by the Senior Special Assistant to the President on Media Affairs, Mr. Garba Shehu, in Nairobi, Kenya wherein President Buhari while discussing with the Japanese leader warned Niger Delta agitators to negotiate or face the Boko Haram treatment.

“The IYC condemn the statement and state that it is reckless and prejudicial to peaceful resolution of the renewed militancy in the Niger Delta,” it added.

While maintaining that the statement completely displayed the federal government’s lack of commitment towards negotiation, it said there was no basis to threaten Niger Deltans with the Boko Haram treatment when discussions are ongoing and considering the fact that the circumstances of the Niger Delta are different from the Boko Haram crisis.

“It shows that the government has made up its mind to use force against Niger Delta communities.
“The IYC wishes to alert Nigerians and the international community that the Buhari government is executing a predetermined agenda against the Niger Delta region which is to attack and kill innocent people.

“This is so because the militants attacking oil facilities are not stationed in any particular place to justify the federal government threat to give Niger Delta militants the Boko Haram treatment,” its saved.

IYC recalled that it was the antagonistic posture of President Buhari towards the Niger Delta region that partly contributed to the renewed militancy.
“President Buhari and his advisers should know that force and war can never win them peace to continue with the exploitation of the Niger Delta oil resources. You may win the war with force but you cannot win peace with force,” it added.

New Naira: MACBAN Warns CBN over Plights of Herders, Farmers who have no Bank Accounts

Why I Re-Appointed Kashifu Inuwa as NITDA Director General – Buhari

We have Recovered N1.7trn of Old Naira Notes – Emefiele