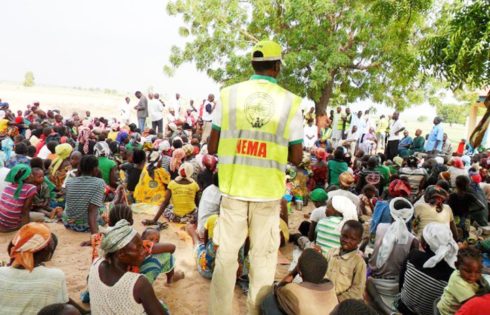 The United Nations expert on internally displaced persons (IDPs), Chaloka Beyani, has called on the Nigerian Government and the international community to take urgent humanitarian measures to save lives and ensure the protection of hundreds of thousands of IDPs in the north-east of the country. Speaking after a four-day visit to Nigeria, Mr. Beyani described the situation resulting from the Boko Haram terror campaign and Government counter-insurgency measures as “displaying all the hallmarks of the highest category crises”.

“We are only starting to get a grip of the gravity and extent of the crisis, as civilians, including children, leaves newly liberated areas. They bear the signs of advanced malnutrition, and of deep trauma, having been caught in a conflict that has cost them their homes, their livelihoods and often their family members,” said Mr. Beyani. The expert noted that the fighting has created more than 2.5 million IDPs in the region.

In a statement issued and made available to Economic Confidential, he stated that “The situation must no longer be downplayed and it is not too late to save many lives. But to do this, the Government must act urgently to ensure that food, shelter, medical care, water, sanitation and other essential services reach IDPs without delay. Due to a gross underestimation of the crisis, the existing supplies will only cover needs for a very short period of time and will be soon outstripped by demands in the weeks or months ahead,” he said.

According to the UN expert, “the vast majority of IDPs live outside camps and receive little or no assistance. Urgent steps are required to identify those people and assess their needs, particularly those of the most vulnerable, as well as the needs of host communities who are supporting them with their own resources.”

The Special Rapporteur, who visited IDP camps in the Maiduguri area, highlighted that many people within camps in newly liberated areas may be faring little better. “Food is scarce and many survive on one basic meal per day while medical care is insufficient. Civilians also require urgent protection, psychosocial support and counseling,” said Mr. Beyani.

“Humanitarian agencies have little access to some areas due to security concerns and have been targeted by Boko Haram, whose terror activities have been contained by the Nigerian military but still pose a significant threat and danger,” he stated.

“Camps should offer protection. Yet I am alarmed to learn that many are in fact the settings for exploitation and abuse of the most vulnerable. Reports indicate that women and girls face demands for sex to access food or to leave the camps. Early pregnancy and marriage are commonplace while many do not report abuse due to stigmatization, cultural factors and the knowledge that perpetrators can abuse with impunity. Protection measures must be stepped-up and camps must quickly come under trained civilian management to prevent abuses,” he said.

The Special Rapporteur acknowledged several positive measures taken by the Government such as a plan for rehabilitating the north-east and the establishment of oversight systems by the Parliament. However, he expressed concern about the lack of international attention and resources to meet the immense needs in the region. He called on donors to provide generous support to meet immediate needs and to enhance their long-term support, to ensure the return, reconstruction and durable solutions for IDPs as well as stability and social cohesion in the region.

The Special Rapporteur thanked the Nigerian Federal Government and the Borno State Government for their cooperation with his mandate. He will produce a full report and recommendations to be presented to the Human Rights Council in June 2017.