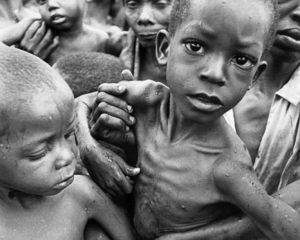 Currently, the inflationary rate has been 16.5 percent since June 2016, unemployment stood at 12.1 percent in March, 2016, with underemployment also being 19.1 percent in the same period. Adding these indicators together, the misery index of Nigerians stand at 47.7 per cent, and this ranks us as having the fifth highest misery index in the world, in the first half of 2016.

As Nigerians battle the ongoing economic quagmire, survival is gradually becoming a thing of concern to many homes, businesses and governments. Gradually, a family which usually had tea, bread and eggs has stated experiencing insufficiency, with milk gradually disappearing from their tea, eggs from the fridge and bread from their table due to an invisible force that makes people poor – INFLATION. What seems to be common to all of these are: complaints, hunger, lower purchasing powers attendant upon the general rise in prices and huge unemployment.

It is important to consider the misery index in the last one year.

The misery index is an economic indicator created by the economist, Arthur Okun, to help determine how an average citizen is doing economically and it is calculated by adding the adjusted unemployment rate to the annual inflation rate. The question is: how is an average Nigerian doing economically? Currently, the inflationary rate has been 16.5 percent since June 2016, unemployment stood at 12.1 percent in March, 2016, with underemployment also being 19.1 percent in the same period. Adding these indicators together, the misery index of Nigerians stand at 47.7 per cent, and this ranks us as having the fifth highest misery index in the world, in the first half of 2016.

Many people are losing jobs, as construction sites are shutting down without new ones opening up. In the first quarter, youth underemployment, according to NBS, stood at 42.24 percent. Clearly, the last one year has been very tough, with more than four out of every ten young people who are willing and able to work only being able to find menial jobs, having graduates resort to selling recharge cards in kiosks, which is not the desire of any country.

What most people experience now is the persistent increase in the costs of food, transportation, vehicles, furniture, electronics, home appliances and clothing among others in the last one year. Real money is gradually losing its value, leaving us with only its nominal illusion. We have lost a substantial part of our purchasing powers due to government policy somersaults.

The implications of a high misery index are undesirable, and they include a poor living standard among the majority of our people, increases in the crime rate, intensifying poverty and hunger. Globally, any country having a eight percent misery index or less is said to be doing great. However, the average misery index should not be beyond 16 percent. In 2015, the country with highest misery index was Venezuela at 214.9 percent, followed by Ukraine, Brazil, Argentina and Jamaica at 82.7 percent, 67.8 percent, 60.0 percent and 34.4 percent respectively. The countries with the lowest are China, Japan, Thailand, Hungary, Netherland and Germany with 2.3, 3.0, 3.4, 5.2, 5.2 and 5.2 percents respectively. What is common to the lower misery welfarist countries are manufacturing, import substitution and export promotion. We must take a clue from them.
For several years, different administrations have articulated their intentions of solving the numerous challenges facing Nigeria, yet I am afraid, intention means nothing, as action is everything.

How do we reduce the current misery index? First, we must know the real cause of inflation and why citizens are losing jobs, particularly youths. It has been observed that the foreign exchange rate in Nigeria has increased by over 70 percent in one year. From N165 to a dollar, it increased to N294 to a dollar at the official interbank market, whilst the parallel market still sold the dollar at N365 only last Friday. The response by monetary authority remains in combating inflation by mopping up more funds via Open Market Operations, increasing MPR and CRR (from an already frustrated financial sector). The real cause of high inflation was not just due to excessive money supply in the system, but the exchange rate instability. In Nigeria, we unfortunately rely on the rest of the world for food, clothing, vehicles, education and many more things. It is ridiculous to know that we spend an average of N1.5 trillion on the foreign acquisition of education.

The fiscal authority and our governments must ensure the injection of funds back into the economy through the right channels, and both the monetary and fiscal authorities must collaborate to ensure that they provide Nigeria with the right policy frameworks and their adequate implementation. The current clumsy and uncoordinated policy implementation in the country leaves much to be desired.

While the ongoing anti-corruption war of the federal government must be encouraged by all, the administration must also realise that what kills the ‘very poor’ now is hunger, inefficient economic policies, a weak local currency, mass importation including of food, clothing and phones. At the moment, governments at all levels must be concerned with the dangers of unemployment and inflation before any other issue. These are the core problems we face, and it must be mentioned that other problems – including poverty, insecurity and crime – could be traced to them.

The minimum requires jobs to be created, and to possibly reduce the menace of poverty significantly, 1,500,000 jobs need to be created per annum for the next 10 years (and this must be private sector driven). We can achieve this in 18 months by activating our textile industry. If we focus on schools’ demand for uniforms, we would grow our country to recover from the current depression as the GDP will return north by six percent within a year. As spin off, we can at least create more than a million jobs annually. If for instance we reduce importation, the naira value would increase across board and, eventually, the misery index will fall considerable.

By solving our problems rather than just talking or complaining about them, Nigeria will can be a model country for many other going through experiences of recession. The world will not only celebrate and but also respect us for purposefully resolving our problems of housing, power, education, security, religious intolerance, corruption and impunity.

For several years, different administrations have articulated their intentions of solving the numerous challenges facing Nigeria, yet I am afraid, intention means nothing, as action is everything.

Still On Orosanye Report And The Public Service Reforms, by Labaran Saleh

On TETFund, NIPRD And Pharmaceutical Research In Nigeria, by Rahma Olamide Oladosu

Rising To The New Reality Of Digital Postal Services, by Inyene Ibanga