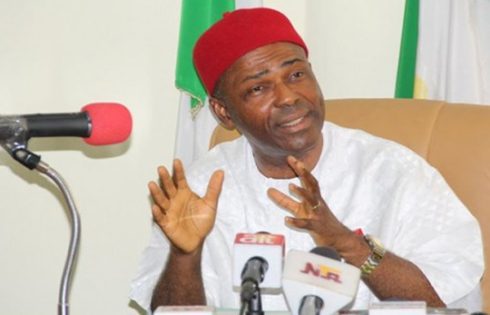 The electricity crisis in the country is lingering because of the overreliance on gas for power generation and hydroelectricity, the Minister of Science and Technology, Dr. Ogbonnaya Onu, has said.

Onu said this at the opening of a two-day workshop on Sustaining Energy for Action Plan organised by the Energy Commission of Nigeria in Abuja on Thursday.

The minister said gas-powered plants and hydroelectricity were subject to gas and water availability, which had not been in the best shape in recent times.

To guarantee energy security for the country, he said there was a need to diversify the sources of energy.

Onu stated, “We have relied essentially on natural gas for the generation of electricity. This has created a lot of problems for the nation, particularly when gas supply is interrupted in any way, including the breakage of gas pipeline.

“The geographical location of Nigeria in the tropics gives us a great advantage for utilising solar energy and also wind energy. We will also look at other renewable sources of energy. Virtually all the developed and emerging countries, including the United States of America, China, Germany and Russia rely heavily on coal for electricity generation, and our own coal is better than theirs.”

The Director-General, Energy Commission of Nigeria, Prof. Eli Bala, said energy was essential in driving and growing national economies as well as improvement in the standard of living of mankind; with fuels electricity and process heat being the most relevant forms of the final energy.

The Country Director, United Nation Development Programme, Lamin Beyai, said the Sustainable Energy for All Action Plan was an articulated strategies and activities for the promotion of sustainable energy, which Nigeria needed.

The minister, who spoke to journalists in Kaduna at the end of the second edition of the National Council on Power, said unless hoodlums stopped vandalising gas pipelines, the epileptic power supply would persist.

Stable electricity, according to him, will only be achievable when contractors execute power contracts properly.

Fashola noted that host communities of electricity assets must also understand that they must make sacrifices so that the nation could benefit.

This is just as the Kaduna State Governor, Mallam Nasir el-Rufai, called for proper restructuring of the Nigerian Electricity Regulatory Commission to ensure viable power supply in the country.

The governor said unless that was done, potential private investors would continue to shy away from investing in the power sector.

El-Rufai lamented the poor regulatory policy framework in the power sector, noting that currently, the distribution companies were struggling under huge debts.