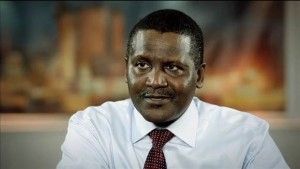 Africa’s leading cement producer, Dangote Cement Plc has reported a revenue of N292 billion in the second quarter ended June 30th 2016 indicating an increase of 20 percent over N242 billion posted in the corresponding period in 2015.

According to the reports filed with the Nigerian Stock Exchange (NSE), the company’s Profit for period stands at N106.3 billion representing a slight decline by 3 percent from 123.1 billion naira declared a year earlier.

Chief Executive Officer of the cement company Onne Van der Weijde in a statement said “We have achieved a commendable result, given the very challenging situation in our main market and general economic weakening across Africa.”

He said the management would continue to respond to the prevailing operating environment with strategically thought measures for the organization to maintain its leadership and profitability.

On expansion, he added, “While the company remains committed to its ambitious plans, we are taking a more measured approach to the roll-out of new capacity across Africa”.

Dangote Cement has more than doubled production capacity since 2013 and said in April it may increase cement capacity by a further 77 percent by the end of 2019. Foreign-exchange constraints in Nigeria have prompted the company to reconsider the pace of its expansion and now believes a five-year building program is more appropriate, it said.

Earnings in the period were affected by lower selling prices, higher fuel costs and the fact that several new plants are still in less-efficient start up phases, the company said.

Cement sales volumes in the period increased 60 percent, bolstered by record volumes in its home market, where the company announced a price cut last September, as well as new plants elsewhere on the continent. The devaluation of the naira will affect costs in the country and Dangote will seek to protect its profit margins, Van der Weijde said.