Home Financial Facts & Figures Buhari’s Govt Got N2.2tr from FAAC in One Year!

In a recent search by the Economic Confidential, the economic intelligent magazine and carefully computed, the administration under Buhari’s watch got the highest allocation in July 2015 with N412.60 billion and the lowest allocation within the period under review of N113.80 billion in May 2016!

The report further reveals that in June 2015, the Federal Government received N173.91 billion made up of N159.72 billion for consolidated Revenue fund, N3.27bn for share of derivation and ecology, N1.63bn for Stabilization fund, N5.49bn for development of natural resources, and N3.78bn for the Federal Capital Territory Administration.

At the start of 2016 and precisely January, it received N175.04bn made up of N160.87bn for consolidated revenue fund, N3.10bn for share of derivation and ecology, N1.77bn representing that of stabilization fund, while development of natural resources and FCT stood at N5.46bn and N3.82bn respectively.

As for the month of February, March and April this year it was the peak of “low returns on investment” as the federal Government witnessed in a descending order of N150.32bn, N139.36bn, N120.92bn to close the first quarter in a not too- cheering manner.

Recall that Economic Confidential had recently investigated and published the allocations from the federation account to states and local governments in the country in the last one year, apart from Internally Generated Revenue(IGR) accruing to the 36 states of the federation and Abuja. It has also published what major revenue collecting agencies have also received within the period.

The report on IGR indicated that only Lagos State generated more revenue than the allocation from the Federation Account which was about 150%.

Economic Confidential also revealed that the internally generated revenue (IGR) of N268bn by Lagos state in 2015 is more than that of 32 other states put together that generated a total of N257bn.

Meanwhile Economic Confidential gathered that apart from the allocations from the Federation Account, as at the end of March this year, total inflows into the Treasury Single Account(TSA) of the Federal Government under President Buhari stood at N3 trillion while the number of Ministries, Departments and Agencies (MDAs) rose to 976.

However, Finance Minster, Kemi Adeosun recently disclosed that TSA has significantly witnessed an increase to N3.3 trillion in May 2016, noting that the Finance Ministry had continuously discovered revenue platforms that had escaped its net especially, shipping levies, airport landing charges, visa fees amongst others. 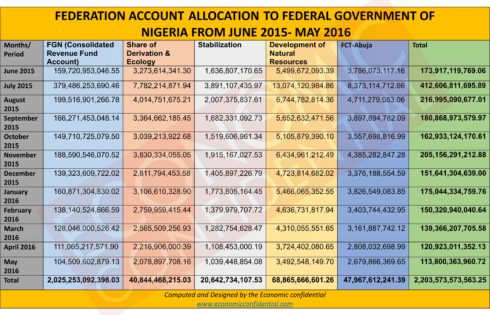