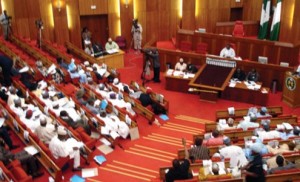 The Senate has summoned the Executive Secretary of the Nigeria Extractive Industry Transparency Initiative, Mr. Waziri Adio, to appear before it in plenary and explain the details of the agency’s 2013 report.

The NEITI 2013 report, according to Waziri while submitting a copy of the document to the Senate President, Bukola Saraki, on Tuesday, contained stunning revelation of over N1trn oil revenue allegedly not remitted to the federation account between 2005 and 2013 by the Nigeria National Petroleum Corporation.
The motion requesting the debate on the report at senate-in-plenary was moved on Thursday by the senator representing Zamfara North Senatorial District, Tijjani Kaura, urging the Senate to urgently look into the report.

Yahaya noted that the report of financial activities in Nigeria’s oil and gas industry showed that the nation made $58.07bn from hydrocarbon in 2013.

He said, “While N33.86bn was realised from solid minerals sector in 2013, $3.8bn and N358.3bn stands as outstanding revenue from the NNPC and its subsidiaries in 2013, which were dues from unpaid consideration from divested oil mining leases.

“More worrisome was the non remittances by NNPC amounting to $12.9bn which was paid by the Nigerian Liquefied Natural Gas to the federation account between 2005 and 2013.”

He claimed that the NNPC introduced different pricing methodology which aided major oil and gas companies to underpay royalties and profit taxes into the federation account.

He added that it was time the Senate fought in-house conspiracy to save the nation from financial paucity.

In his contribution, the Deputy Senate President, Ike Ekweremadu, suggested that the Executive Secretary of NEITI be made to formally present the report at plenary.

Saraki expressed deep concern at the huge loss of revenue following the disclosures in the report.

He said, “I am aware of the report and what I discovered was a huge loss which has to be deliberated upon. So, the Executive Secretary has to come and submit the report officially,” he maintained.