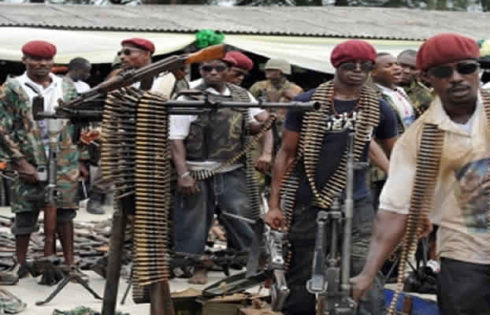 Finally the battle line is drawn between the major militants in the South-South region as the old Movement for the Emancipation of the Niger Delta (MEND) confronts the new Niger Delta Avengers (NDA) on destruction of oil pipelines.

MEND who was used during President Umar Yar’Adua’s administration to secure amnesty of the militant has come out openly today to castigate former President Goodluck Jonathan and other Niger Delta leaders,blaming them for the “ungodly conspiracy of silence” over recent incessant attacks on oil installations in the region by (NDA).

In a statement, MEND condemned the activities of the Niger Delta Avengers (NDA), saying communities which “harbour such criminals” are not protected.

“What is more worrisome to us is the ungodly conspiracy of silence of the region’s elite and their tacit support of the NDA’s conduct under the pretext of a so-called ‘Niger Delta struggle’ which went to sleep in luxury hotel suites in Abuja and around the world for the entire duration of the six years of Mr. Jonathan’s binge and unmitigated disaster as President.

“However, we hereby remind our communities, which harbour criminals such as members of the NDA that their communities are not protected by the extant principles of international and/or municipal law during a conflict.”

MEND also advised the military to stick to the rules of engagement in line with international best practices.

It commended President Muhammadu Buhari for the commencement of Ogoni clean up, saying Buhari did what a son of the region failed to do in six years.

The group criticised former President Goodluck Jonathan, calling him a “clossal failure over his handling of the region’s numerous environmental challenges.”

“It is in the light of this premise, but particularly because of the colossal failure of former President Goodluck Jonathan-an indigene of the region who was at the helm for six (6) years – to address the remediation of our environment, that the Movement for the Emancipation of the Niger Delta (MEND), for and on behalf of the good people of the region, sincerely and warmly commend President Muhammadu Buhari for his political will and sagacity in tackling the vexed issue of the clean-up of Ogoniland with the June 2, 2016 launch and implementation of the United Nations Environment Programme (UNEP), one of the cornerstones of our agitation over the years,” the group said.

You can’t Keep Demanding the Accountability you don’t Give, Presidency Tackles SERAP