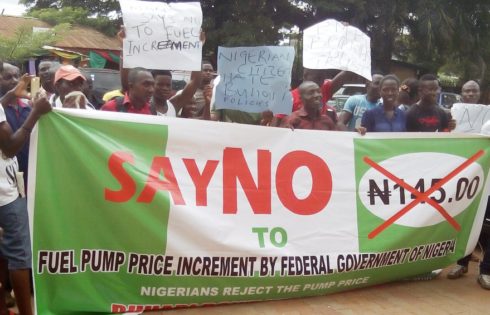 It is no longer news that the controversial fuel subsidy on petrol has been removed leading to the increase in price of the product from N87 to N145 per litre. The Federal Government has consequently received knocks and kudos for the decision.

While some hailed the decision, as they see it as a way of addressing the perennial fuel crisis in the country, others believe that the decision was hasty and insensitive.

Looking critically at the recent history of deregulation of oil sector in Nigeria with the current economic woes and high cost of living due to the rise in dollar rate, both sides of the argument can vehemently justify their stand.

Recall that Nigerians have experienced chronic scarcity of fuel in the past few months to the extent that the product sold for as high as N350/litre. This is despite the subsidy on the product which is expected to sell at N86/litre.

Although the decision to remove subsidy on petroleum has been hailed by marketers and other stakeholders in the sector, Femi Falana, a human rights activists and Senior Advocate of Nigeria (SAN), described the increase as “insensitive and illegal.”

He said the government lacked the statutory power to increase fuel pump price, as the body empowered to take such decision was yet to be constituted.
“The cost elements that make up the N145 are provocative. If the total landing cost of a litre and other charges are fixed at N138, what is the basis of fixing the price at N145,” he said.

Conversely, the Petroleum Products Pricing Regulatory Agency (PPPRA) stated that the Federal Government would, through this new price regime, ensure that the price of products was monitored and modulated to ensure that citizens got fair value for the products they purchased.

Similarly, the National Secretary, Independent Petroleum Marketers Association of Nigeria (IPMAN), Alhaji Danladi Garba Pasali, called for a total deregulation of the sector, allowing market forces to determine price. This, according to him, will ensure the efficiency of the sector.

It would be recalled that the administration of Goodluck Jonathan in 2012 attempted to remove subsidy, but it was met with protest by the opposition and industrial action by the Nigerian Labour Congress (NLC).

Jonathan had said that the “country cannot continue to waste resources meant for a greater number of Nigerians to subsidise the affluent middle class, who are the main beneficiaries.”

This is similar to the current argument with the belief that the Nigerian masses are not the major beneficiaries of the subsidy.

More so, the Minister of State for Petroleum Resources, Dr. Ibe Kachikwu, pointed out that the administration of President Muhammadu Buhari is not as advantaged as the immediate past administration of Goodluck Jonathan which had money to fund fuel subsidy.

Speaking before the House of Representatives, Kachikwu clarified that the current hike in the pump price of petrol was different from that which the Jonathan administration executed in 2012, stressing that the “present administration is suffering from non-availability of foreign exchange to import petroleum products.”

He said: “The average price of crude oil then was valued at $110 per barrel and there was availability of funds to cater for the subsidy regime due to booming oil prices.

“Importation was based on 50per cent financing from Nigerian National Petroleum Corporation, NNPC and 50% from oil marketers, while sourcing of foreign exchange for importation of petroleum products for both the NNPC and oil marketers was solely from the Central Bank of Nigeria (CBN) and at official government rates. Presently, financing for importation of products is almost 100 per cent handled by NNPC and this model is unsustainable.”

Although the administration of Goodluck Jonathan introduced some measures to cushion the effect of the price hike, it was not as effective as intended.

The Subsidy Reinvestment Programme (SURE-P) was expected to provide starting capital for budding entrepreneurs in Nigeria. The programme was rocked by scandal as the Senate Ad Hoc Committee on the SURE-P revealed that the Nigerian National Petroleum Cooperation (NNPC) is unable to account for N500 billion accruing to the programme.

As a matter of fact, former chairman of the programme, Christopher Kolade, said he resigned his position in 2013 because its operations were becoming tainted with corruption and politics, thereby losing its credibility.

He said some officials of the administration of former President Goodluck Jonathan were practising “something that was lower than the transparency” expected of an interventionist agency like SURE-P‎.

He said he met resistance when he raised the issues as he was overruled by some powerful forces within the administration.
The failure of the previous administration may also be the reason the current situation has met with resistance by a section of Nigerians and by extension a section of the Nigerian Labour Congress (NLC) and citizens.

Some members of the National Union of Road Transport Workers (NURTW) staged a peaceful protest against the increment of the price. Leaders of the union, who took to the major streets, instructed their members to down tools, to show their displeasure over the new development on the new pump price announced by the Federal Government, while commuters were stranded.

As expected, motorists and commuters vehemently complained about the hike, saying this was coming at a time when the country was faced with numerous challenges, ranging from inadequate power supply and technical collapse of the economy.

Although some were of the contrary opinion that the removal of subsidy was best for the country, the majority still maintained that the present administration was not considerate in its policy.

Meanwhile, just like its predecessors, the government has rolled out some palliatives to cushion the effects of the price hike. The programme, which is expected to be implemented with immediate effect, promises to feed 5.5 million school children for 200 school days in first phase of home-grown school feeding programme and over 1.6 million Nigerian traders, market women, men, artisans to receive loans.

Also, one million extremely poor and vulnerable Nigerians are expected to receive N60, 000 this year in 12 months payments of N5000 each.
All together, the federal government would be directly impacting the lives of more than 8 million Nigerians in different social investment 2016 budget spending that would provide succor and be a ready-made palliative to ordinary Nigerians.

According to the Senior Special Assistant for Media and Publicity to the Vice President, Mr. Laolu Akande, payment of between N23, 000 and N30, 000 per month to 500, 000 unemployed graduates who would be trained, paid and deployed to work as volunteer teachers, public health officers and extension service workers among other responsibilities.

They would also be given electronic devices to empower them technologically both for their assignments and beyond. Similarly 100, 000 artisans would also be trained and paid N191.5 billion has been set aside for this in recently passed budget.

These may, no doubt, be a good measure if implemented to the later but the problem many administrations usually face is not putting things in place but implementing them to the real beneficiaries.

More so, the fact that the previous SURE-P programme was ravaged with corruption has generated fears amongst Nigerians that the current regime may not just utilise the subsidy funds for the development of Nigeria as promised. More so, other analysts believe that the executive and legislature should cut their cost of governance rather than put the burden on Nigerians.

All the same, it seems removal of subsidy may have come to stay as even the government that sold crude oil for over $100 per barrel still insisted on removal of subsidy, saying it’s not the best decision economically.

Despite the seeming trust some sections of the country have on this administration, the major problem with the new price regime may simply be due to the already high cost of living due to the embargo placed on importation of some products. As a result, Nigerians have to buy both the dollar and products at inflated prices from black marketers.