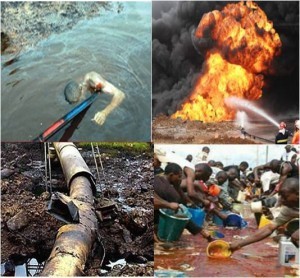 Nigeria has lost N12.566 billion in one month due to petroleum products theft and vandalisation of the facilities of the Nigerian National Petroleum Corporation, NNPC.

Giving a breakdown of the losses, the NNPC, in its Monthly Financial and Operations Report for March 2016, disclosed that crude oil loss amounted to N5.94 billion; petroleum products losses stood at N1.757 billion, while N4.87 billion was spent on pipeline repairs and management cost.

Gas pipeline According to the report, the losses negatively affected NNPC’s transfer to the Federation Account from the domestic sale of crude oil and gas. Specifically, the report noted that transfers to the Federation Account by the NNPC dipped by N9.23 billion to N69.544 billion in March, compared N76.614 billion recorded in the preceding month.

Domestic sale of crude oil However, the report highlighted that NNPC’s total payment to the Federation Account Allocation Committee, FAAC, in the month under review stood at N75.874 billion, due to the payment of N6.33 billion, which was for the repayment of a N450 billion debt to the Federal Government.

The NNPC, the report added, earned N67.01 billion and N2.535 billion from the domestic sale of crude oil and gas respectively, bringing the total sales receipts in the month under review to N69.544 billion.

To this end, the NNPC stated that the sum of N1.118 trillion had been paid to the Federation Account being domestic crude oil and gas and other receipts from April 2015 to March 2016.

Also, the report noted that in the last one year, between April 2015 and March 2016, the NNPC had recorded crude oil losses of N15.456 billion; petroleum products losses of N42.93 billion, while N95.118 billion had been expended on pipeline repairs and management.

In addition, the NNPC expended N249.329 billion on subsidy in the last one year, from April 2015 to March 2016, while it earned N918.8 billion from crude oil sales within the period under review.

The report further disclosed that incessant vandalism and products theft had continued to destroy value, putting the NNPC at disadvantaged competitive position.

It argued that a reduction in vandalism will indeed unlock several industry upsides which include improved upstream oil production due to reduced pipeline disruptions, improved refinery utilization due to increased crude oil feed from restored pipelines, and reduction of crude/product losses.

According to the report, a total of 3,153 vandalized points were recorded between April 2015 and March 2016, adding, that crude and products losses had continued to cost NNPC and the country huge amount of money.

In particular, the report stated that the 48-inch Forcados Oil Terminal (FOT) Export line was vandalized in February 2016, which crippled the Nigerian Petroleum Development Company, NPDC and all Joint Venture, JV, partners’ ability to export crude oil from the terminal.

It noted that this situation led to the declaration of force majeure by Shell Petroleum Development Company, SPDC, occasioned by production shut-in of about 300,000 barrels of oil per day.

However, the report stated that the, “NNPC leadership is already addressing the Corporation’s key business and operational challenges as well as currently undergoing a comprehensive restructuring exercise aimed at repositioning it for efficiency, profitability and value creation for the common good of the Corporation and its stakeholders.

“NNPC restructuring is also on-going. The program intends to restructure the Corporation into value adding autonomous entities in congruency with the overall corporate vision.”

Japan Pledges N910m To Nigeria For Gulf Of Guinea