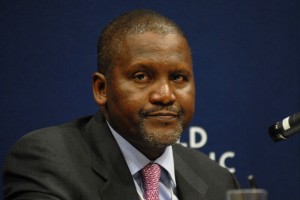 To cushion the effect of the current economic downturn, the Dangote Foundation on Thursday commenced the disbursement of N400m micro grant to 40,000 indigent women in all the local governments in Lagos State.

The grant is a poverty alleviation strategy of the Foundation set up by Africa’s richest man, Aliko Dangote in 1993, according to a statement.

The programme is costing the Foundation N10bn and six states have so far benefitted from it, according to a statement by the DF.

The empowerment programme, which is meant to compliment the efforts of the government at all levels, is targeted at the disadvantaged and vulnerable women and youths, with a one-off N10,000 cash transfer to boost household income generation.

The Chairman of the Foundation, Aliko Dangote, had expressed concern over the widespread poverty among the people, especially the youth and women at the grassroots, and promised that his organisation would institute a scheme that would help in addressing the menace.