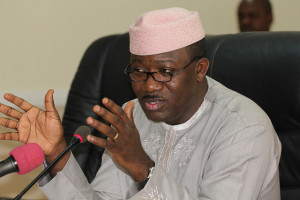 The Minister of Solid Mineral Resources, Dr Kayode Fayemi, has said that over five million Nigerians are involved in informal mining.
The minister spoke, at a town hall meeting organised by the Federal Ministry of Information and Culture, in Kauna.
He said there was need to formalise the sector, register and organise informal miners into cooperative societies for easy financing.
He said his ministry was ready to organise and make the informal miners become useful to the country.
He said: “We are endowed with resources, we can be a mining destination with determination, commitment and resilience. The key challenge is organising the sector in a way that the people will get social benefits. Over five million Nigerians are involved in mining informally, they don’t have licenses, but we can organise them to be useful to them and to the country.”
The minister regretted that Nigeria spent far less than its neighbours on exploration, saying that Burkina Faso used to spend $50 million on exploration, annually, while Nigeria spent $300, 000 annually.
While admitting that mining was capital intensive, Fayemi said the ministry was working with the Bank of Industry and other commercial banks to provide intervention fund to miners.

EU Supports Nigeria with $1.3 billion to Diversify its Econom