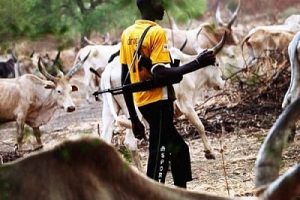 The farming people of Agatu local government area of Benue state are in wailing. Why? Fulani herdsmen terrorised their villages for over two weeks, maiming and killing many of them in addition to destroying their property worth millions of naira.The clashes between the two parties have been a recurring decimal since the herders first stepped on the Agatu soil many years ago. This has led to the displacement of many people with a large population being rendered homeless.The life of the Fulani cattle rearer is nomadic in nature. From time immemorial, they have moved their cattle from one place to another searching for green pasture for them.The climatic condition of the northern part of the country, particularly in the North-east and North-west, has also forced the herders to move further south in search grazing lands.The crisis in Agatu is one too many. In different parts of the country, there have been clashes between the Fulani herdsmen and villagers, most especially farmers; from the North to the south-west, from the South-east to the South-south.The issue on ground is a massive one that has made some to conclude that the Fulani militia causing this havoc may even be elements of Boko Haram terrorists because of the systemic way they have attacked and thereafter occupied communities.The ongoing crisis is as a result of attacks and reprisal attacks carried out by the parties. The herder’s prized possession is his cattle and he does not joke with them because they are his main source of livelihood, and the farmers’ prized assets are his crops and neither would want their investment tampered with.The initial problem is the issue of grazing lands. In search for food for their cattle, the herders stray into farmlands and unfortunately, growing crops are trampled upon and, in most cases, are destroyed with owners of such farms losing millions of naira in the process. This, as expected, angers the farmer and such frustration is taken out on the herders or their cattle, who also lose millions of naira in much the same way as the farmers.
It is common knowledge that the herdsmen, through their pasturing activities provide beef with their cattle, but also, the farmer provides even more varied food options than the herder. This has led to a seemingly unending cycle that has led to the creation of a refugee situation in places, like Agatu and parts of Benue state, where the herdsmen have ventured into.
The Fulani herdsmen have been, most times, said to have been seen dressed in military uniforms and wielding state-of-the-art weapons when attacking the villagers. Some of the places that had been attacked in recent memory are Enungba, Ogule, Egla, Ogan, Ushal,Okpanchenyi, Owule, Kpele, Ukpokplo in Benue. Other states that have been attacked in the past included Kogi, Cross River, Ondo, Adamawa, and even Bayelsa. They have been also accused of raping women as well as kidnapping some others.
The economic implications of this issue cannot be quantified; what with the loss of lives and property. The refugee situation created is a major drain on the country’s resources because the insurgency battle and the attendant internally displaced persons’ situation is stillurdening on the government and a further crisis will further be a drain on the nation.
Also, it has, in many of such attacked places, resulted in an increase in the prices of foodstuff. Benue is known as the Food Basket of the Nation and that explains thestrategic importance of the state in the nation’s food chain. Hence, any crisis there can trigger an increase in the prices of foodstuff across the country.One of the proposed solutions to this issue involves passing a law that would protect both farmers and herdsmen. There should be areas clearly dedicated to or marked out as grazing lands for herdsmen. Part of that law should also stipulate appropriate punishment for any herder that destroys crops belonging to farmers. It may also not be out of the way to have a record of herders when they move into an area, especially if they intend to stay in that area for a while.
This is why the recent agreement reached by governors and President Muhammadu Buhari over the creation of ranches for herders is the right step in the right direction. With this, the end to the incessant clashes between the herdsmen and farmers across the country may already be in sight.

SPECIAL REPORT: Maraba Takushara, an FCT Community Under Siege… So Close to civilisation, yet so far

Yahaya Bello, PWDs and the Love of Humanity

Travelogue: Yahaya Bello and the Audacity to Dream (1)

Why I Re-Appointed Kashifu Inuwa as NITDA Director General – Buhari