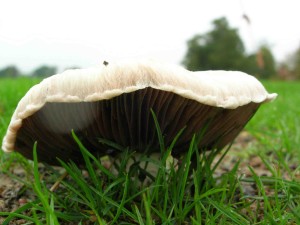 There is a common crop abounding all year round across the country but with almost fantastic economic potentials, which potential is yet to be fully realised. According to experts, if it is properly harnessed, mushroom is capable of boosting individual, family and even national economy.
Professor of Mycology and Plant Pathology at the University of Benin John Aroye  Okhuoya, says mushroom growing is big business but warned that it could go into extinction  if not grown in large farms as the environment was changing and most of the indigenous species are disappearing and that is not good for the country he added.
He urged stakeholders to embark on public enlightenment on how some Asian countries are making a lot of money out of mushroom production.
Mushroom is also used in the production of drugs, food supplements and so on.
“We have mushroom rice which has been tried as a means of increasing the appetite of HIV patients and it was found that they gained weight. You can have mushroom bread; fortify our break with mushroom because they contain protein. No cholesterol, we can have mushroom snack. They are in the market and Asian countries are making billions of dollars from mushroom so why can’t Nigeria also begin to think of things like that, diversify” he stated.
China came into limelight as major world producer of mushrooms through the introduction of what has come to be known as the Household Responsibility System (HRS) reforms. China produces more than eight million metric tons of mushrooms valued at over $40 billion and employing over 30 million people.
This shows a dramatic increase from the 60,000 metric tons before the 1978 reforms.
Today, according to reports, Pennsylvania is reputed to be the leading producer of mushroom in the world employing over 10 million people that produce mushroom valued at more than 63.8 million Chinda, who won the 2009 Local Raw Material Content Award recalled that he was able through research to successfully and scientifically produce the seed that grows the mushroom (spawn).
He expressed optimism that mushroom production can create jobs in Nigeria and reduce poverty and restiveness which has characterised the youth in recent times.
He said if well articulated, mushroom business was capable of improving the agricultural output as well as boosting the industrial development of the nation.
Another mushroom expert described mushrooms cultivation as “white Agricultural Revolution” as an investment of N40,000 mushroom cultivation training could lead to a turnover of between N500,000 and N1 million within 6-10 months. At the end of that period, the new investor could raise as much as N1 million in turnovers.
“I am talking about 30,000 to N40,000 weekly in one month that translates it to close to N1 million. It is a cumulative sale of mushroom” he said.
It is important to begin the business by first undergoing training from experts in the field as a way to distinguish between edible and poisonous species of mushroom. Experts are unanimous on the need for controlled scientific cultivation of mushrooms to check the possible incidence of mushroom poisoning accessioned by picking of mushrooms in the wild.
The commercial mushroom farmer noted that people of old had their own way of identifying and differentiating poisonous from edible species, even as most of the criteria they use are not reliable and are best described as old wives fables.
According to him, one of such tales is the belief that insects and animals both domestic and wild do not eat poisonous mushrooms. Prof Okhuoya described such claim as not true even as he said some insects and rodents eat some poisonous species and survive because the body mass of these creatures were not the same with that of man.