The Federal Government has inaugurated an 8-man steering committee for the Growth and Employment Project which is aimed enhancing job creation and increased non-oil growth in specific high-potential value chain sectors.

The  Committee is chaired by the Minister of Industry, Trade and Investment, Mr. Olusegun Aganga, with members drawn from the Ministries of Finance, Information and Communications Technology;  Culture, Tourism and National Orientation, and Agriculture and Rural Development

Speaking during the inauguration in Abuja, on Tuesday, Aganga said that the committee was critical to enhancing inclusive economic growth through  job creation and wealth generation.

He said, “The GEM Project is very important to the Federal Government and the Nigerian economy. It is an employment project by the Ministry of Industry, Trade and Investment , supported by the World Bank and the UK Department For International Development (DFID).The World Bank is providing a loan of about $160m while the DFID is providing a grant of about $100m. The project is aimed at job creation and increased non-oil growth in specific high potential value chain sectors.

“The project was conceptualized after the conduct  of Growth Poll Studies in 2007. The study identified key sectors with potential growth in the economy with high potential to generate a lot of jobs. This is what the Nigerian Industrial Revolution Plan and  National Enterprise Development Programme ,which were launched by President Goodluck Jonathan recently, seek to achieve.”

The minister added that FMITI, working with the World Bank and DFID, had already identified eight key sectors with potential for generating employment , adding that the impact of the implementation of the GEM programme would be felt in no distant future.

He said, “It is expected that the GEM programme, which will run from June 2013 to September 2018, will create a minimum of about 460,000 jobs, comprising of 110, 000 direct and 350, 000 indirect jobs. There are eight priority sectors that we have identified, based on their growth and employment potential, which are also areas of focus in our NIRP and NEDEP.  They are: Information and Communications Technology; wholesale and retail; hospitality and tourism; meat and leather, construction and real estate, entertainment industry; agro processing, light manufacturing and entrepreneurial development.

“The summary of the project are categorized under three pillars, which are aimed at creating employment and growth in the non-oil sector. The pillars are : providing investments to address the gaps that prevent key growth sectors from expanding and hiring more Nigerians; supporting Small and Medium Enterprises to develop new business models , and improving the business enabling environment so that businesses can grow faster and become more profitable.”

Speaking during the event, the World Bank Sector Leader, Finance and Private Sector Development in Nigeria,  Mr. Michael Wong, said  that the World Bank was committed towards the successful implementation of the  project , adding that it would reach about 10,000 enterprises within the implementation period.

“The World Bank believes that the GEM project will not disappoint the minister’s expectations but will deliver  results  The World Bank looks forward to working with the Ministry of Industry, Trade and Investment, particularly as the GEM project focuses on some the initiatives that minister Aganga has started over the  last two years, which  include the Competitiveness Council and the recently launched Nigeria Industrial Revolution Plan(NIRP) and the  National Enterprises Development Programme(NEDEP).”

He added, “ The World Bank expects the GEM project to deliver  results  very quickly within the next six months because the project builds on some of the initiatives that are already on the table under Mr. Aganga. The project is geared towards supporting capacity building of enterprises as well as bridging the information gap between providers and the suppliers. 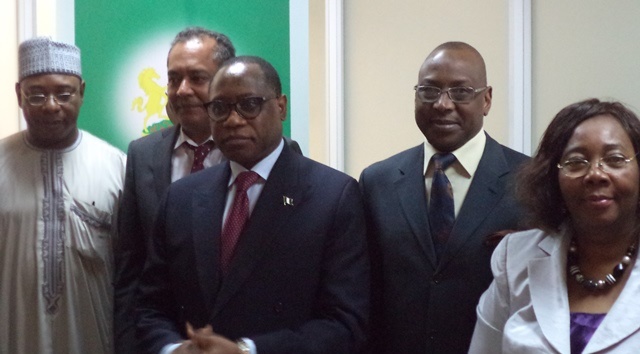